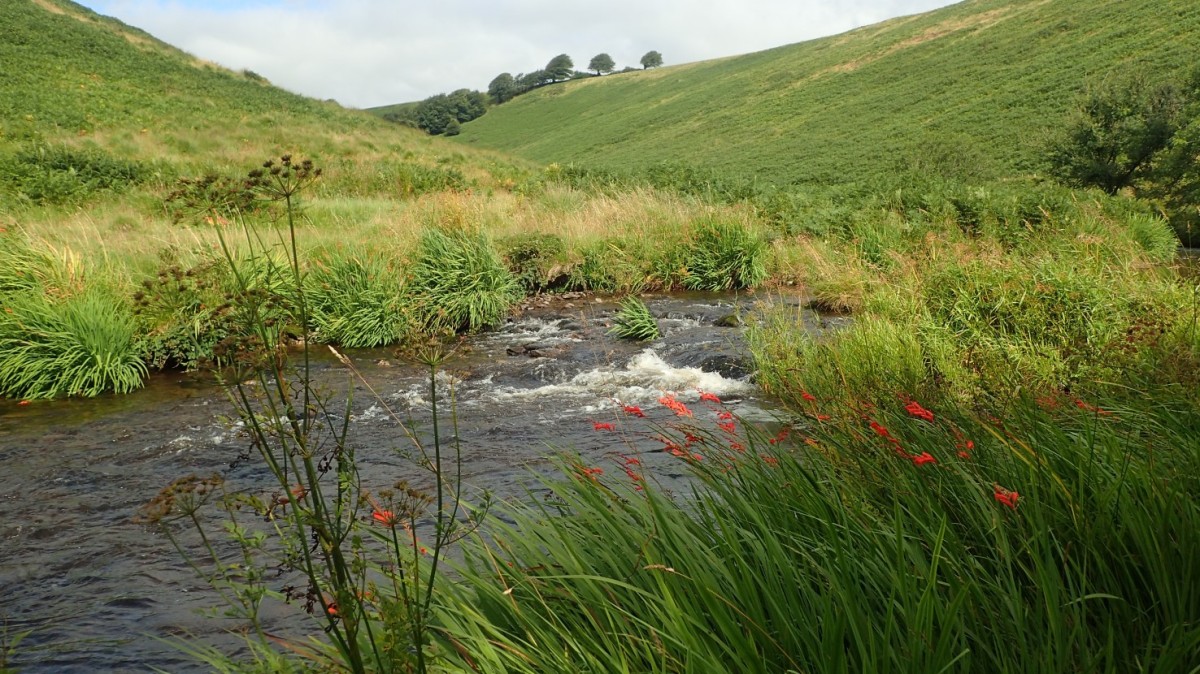 This was my first walk as part of a three-night getaway and camping trip down on Exmoor. I drove down in the morning – car fully loaded with my tent and all – somewhat ready to do this long and challenging walk before looking to pitch up near Winsford.

As far as I know, there’s just the one car park in Simonsbath. To the north side of the B3223 road and clearly marked on the OS maps. Spaces are a bit limited, as is the width to keep larger vehicles away. Beyond what you see above is another small area of approximately similar size.

Toilets are available and, while it’s probably ignored or missed, there is a £2 parking charge for the day (overnight parking is prohibited without permission). I’m always happy to drop a couple of spare coins in (no card or electronic options).

Up on to the B-road and, immediately to my right, I spotted a fridge outside of someone’s house, offering ice cream and cold drinks for a small donation! If only I’d remember this come the end of the walk…

Crossing the road towards woodland, I was already on the Two Moors Way and I’d be seeing a bit more of this long-distance path on the next day.

Soon, I was walking beside the River Barle. Again, I’d see more of this river the very next day.

I also passed the ruins of Wheal Eliza Cottage. There wasn’t an awful lot left to see. I took few photos because a family were exploring much of it. I believe ‘wheal’ is an old English word for ‘a place of work’.

I was following the way towards Cow Castle (it’s a hill), when I should this ‘permitted bridleway’ that crosses straight over the river… No stepping stones. No footbridge!

At the next footbridge beyond the hill, I would turn off and leave the Two Moors Way for a few hours; now heading towards Blue Gate.

I followed the byway towards Horsen Farm. Up on Horsen Hill to my left, I could see a lone deer (possibly a stag), standing in the gap between trees.

A bit further on up the valley and there was a large gathering of deer on this same hill. Stags and their many young. All watching me, as I sat down and rested for a cup of tea before hitting the road.

This was one of my first walks in a new pair of trail running shoes; the Topo Terraventure shoes. Not waterproof but comfortable and lighter than many boots. They have a drop of only 3mm between the heel and forefoot and the toebox is wide enough to allow your toes to spread naturally.

Above them I had a pair of Montane VIA trail gaiters. This was my first outing with them… I wasn’t expecting them to keep the water out like regular gaiters but they did a good job of keeping the stones out of my shoes.

My plan was to walk the roads for the next couple of miles. There’s no parallel public right of way nearby. I’d thought about attempting to forge my own across open access land but the terrain looked like it would’ve made it a real challenge and I still had a very long way to walk.

This first road was very quiet. I saw one car pass me, then a mountain biker and that was it, until I reached Blue Gate.

Like many of the other named gates around Exmoor, I believe Blue Gate is one that gives access to the former park or forest boundary.

This next road was busier and, soon recognising this campsite (Emmetts On Exmoor), I realised I had driven this way in the morning. Had I detoured in the opposite direction, I’d have passed a massive cairn-like memorial.

I followed this busier road as far as Kinsford Gate. To be fair, I probably could’ve comfortably forged my way along the other side of the hedge to my right. But then I’d have missed the (apparently empty) campsite.

At Kinsford Gate, I would almost meet the route of the Exmoor Perambulation – an historic thirty-one mile route that follows the boundary of the former national forest. Every year, people head out to walk the full perambulation. I haven’t attempted it for six years but hope to be back in 2022.

Heading north-west now up the quieter road, I’d soon reach the entrance to Five Burrows Hill. There are very few parking opportunities along this road for the less adventurous.

Initially, I was looking for the White Ladder stone row – I don’t know of any other stone row on Exmoor. But I couldn’t see it for the grass. Plodding on up through the marsh, I made my way up to the barrows.

A couple of barrows now sit in a field with no public access. Beyond them, I could see the Atlantic and coastline of North Devon (none of which I’ve walked). This was probably between Clovelly and Bideford.

I splashed my way on to the trig point, as a man on a barrow ahead of somehow disappeared. Somewhere. I’m all for bagging trig points but why would they set so much concrete upon an ancient monument?

I could see Dartmoor, many miles away. The Two Moors Way path crosses Dartmoor as well as Exmoor (hence the name). Meanwhile, it was time for lunch.

After lunch, I returned to the road for a little while, now following the Tarka Trail – another long-distance path that crosses both moors and National Parks.

I passed on the opportunity to visit Mole’s Chamber, as I walked north towards the B3358. I was looking for the Edgerley Stone in this field but failed to spot it. I presume the Mole’s Chamber is like a shallow cave or pothole entrance.

Looking at the map now, I realised that I missed an opportunity for a short detour west to Shoulsbury Castle and another trig point. I’ll have to return another day… And probably visit the Mole’s Chamber.

This bridleway would lead me up to Woodbarrow Gate, with the Pinkery Centre visible away to the right – that’s the start and end point for the full Exmoor Perambulation, with the half-distance walk finishing at Pickestones Lane.

Now walking to the east, I could clearly see the trig and mound of chains barrow. One I’d missed out on in another walk, possibly three years ago.

I crossed over Pinkery Pond – surprised to see not a single person entering the water. I’ve previously know it as a popular spot for wild swimming.

I walked on; keeping foolishly to the north side of the boundary line. In spite of the warning signs for “deep bogs” and “walkers only, no bikes”…

I climbed back over the fence as those bogs began to deepen and did, this time, make it on to Chains Barrow.

Last time out, I met a stagnant puddle beneath the kissing gate and right beside the Tarka Trail. Midges were swarming and ready to feast. I’d expected this again but, there wasn’t much of a puddle at all.

…Which is more than could be said, as I climbed back over the stile after touching the trig to continue my walk!

They were not kidding about the depth of those bogs – my walking pole, here, was a good 1.2m long!

Back to the Tarka Trail and I walked on the Exe Head (the source of the River Exe) and I rejoined the Two Moors Way, now heading towards Great Ashcombe. Not too far to go!

I then made my way down and in to Ashcombe Plantation. Waymarking for the Two Moors Way had been good thus far. This would soon lead me to the car park and then it was on to my campsite.

I arrived at around 18:00 and was soon pitched up on a dry and breezy evening. Overnight, I captured a full moon with the first of the night’s stars. Exmoor is one of the UK’s Dark Sky Reserves – if only my camera could serve it justice!

This walk ended up only one mile longer than intended. I’d explored several paths that were new to me, saw more of the Two Moors Way and visited another ancient site on Exmoor.

Length of this walk = 17 miles