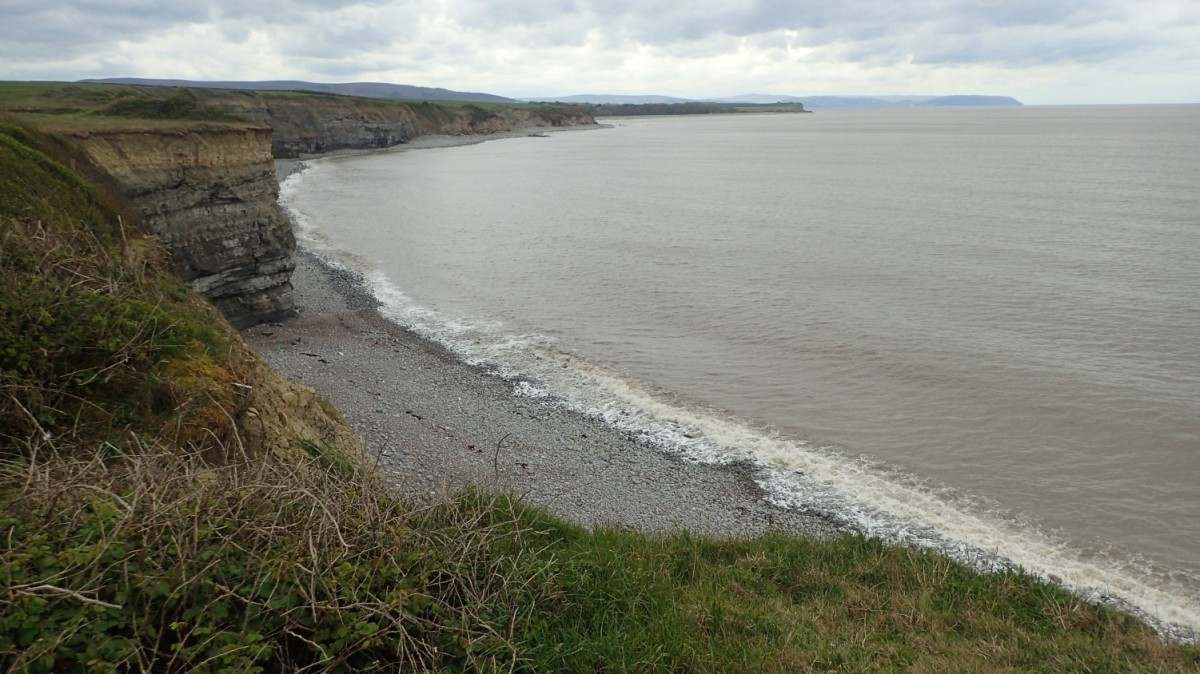 This was the first weekend in May where I had the idea of driving down to Exmoor for a full day’s walking. But the weather forecast looked grim – and it has barely improved as the weeks have passed. I was sizing up the Quantock Hills, when I spotted the ‘Castles and Coast Way‘ marked on the latest OS Map.

It was time to explore this thirteen-mile long Way, walking between the Quantock Hills and the West Somerset coast.

I chose to begin my walk from Nether Stowey. At the opposite end, you can find a free car park down at Lilstock. Between the two, options may be limited – unless you park with consideration in Stogursey.

I parked behind The Ancient Mariner and across the road from Coleridge Cottage. It is signed as a public car park. But even at 9am on a Monday morning, there were fewer than ten spaces available. It looks to me as though local residents also use these spaces. It’s understandable when you see a lack of other options beyond the congested streets. This, of course, is an issue one can recognise all over the UK.

I turned left out from behind the pub and towards the A39. Even at this point, I realised that the waymarking for this path was likely to be very good.

So, the Castles and Coast Way (created in 2019) begins by passing Stowey Court on very clear and easy-to-follow path.

I almost missed the right turn immediately after this farm building. I didn’t see a waymark for any path but had faith in my map-reading ability. It may be the only questionable section of this Way (and reason to always, always carry some form of a map).

Soon after this, I was on my way up to Pinnacle Hill, where I’d hoped to bag my only trig point of the day. If it wasn’t for this Way, I doubt I would’ve otherwise followed these paths on another occasion.

This hill would not compare to any of the Quantocks, now in observance of my journey towards the coast.

Unfortunately, this trig pillar was out of reach beyond no less than two boundaries. Officially, I didn’t bag it. I have read that others have gained access through a gate further along the path; before swiftly tracing their steps back to the right of way.

Trig-bagging is an odd pursuit, isn’t it?

My first real glimpse of Hinkley Point and its nuclear power station(s), as the excellent waymarking continued.

Existing fingerposts would now direct towards the England Coast Path, via. Stogursey.

Next up was Peadon Farm…

I deeply detest walking through an across farm yards, even where a right of way is present. I’ve had situations in the past where the footpath is obstructed, overgrown or just very hard to find and follow. On this occasion though, I was in little doubt of my way forward. It was a busy place and my presence went unchallenged. Such a relief! Not all farmers are of the anti-walker stance!

My walk continued up and over Tet Hill. Less of a mound than the one before and with cattle for company… But I kept my distance and they caused me no bother.

Mere moments beyond Tet Hill Barn, this cat lay defiant on the footpath. Would he/she allow me to pass? Well, they only movement was in their neck and eyeballs, as they carefully watched me step past on my way to Stogursey.

Thus far, I hadn’t seen any suggestion of the castle ahead. It would be my first of two sites on this walk. But, as I crossed the next field, full of sheep, I spied the walls of this ruin.

Stogursey Castle dates back to the 11th or 12th Century and is now owned by the Landmark Trust.

Despite having not been here before, I did know of the moat surrounding the old motte and bailey. I’d hope to be able to step on to the mound itself but, what lies across the water is private land and the cottage before the bridge is reserved for holiday lettings.

It’s all very nice to look at though. How might Stowey Castle compare? We’d have to wait until the end of the walk to find out.

I followed this raised path in to Stogursey; moving swiftly through the village as drops of rain began to fall.

I followed the Way past this fishing lake beside Bayley’s Brook. Several men had set up for the day, with shelters and all. A bit further on and I’d also pass the campsite.

With those large cranes looming closer, I had a decision to make. From this point, the walk can form a figure-of-8. Left or right? I chose to now head clockwise through Burton, meaning I’d return to this point later on from Shurton.

This had been forecast as a heavy rain day, as according to the MetOffice and I’d packed accordingly.

I made my way down towards the coast, just east of the Lilstock car park, when I found this notice, warning of unstable cliffs beside the path ahead.

Coastal erosion has been of growing concern throughout the south-west in recent years. From the cliff falls at St. Audrie’s Bay to the closure of the Blue Anchor Inn. Even these less-celebrated pockets of Somerset weren’t safe from the effects of nature and its force.

Of course, I made my way alongside these cliffs without incident and soon found myself staring at the pier heading out to sea, from what I presume will be Hinkley Point C – soon to be the only working power station on this site.

In the shadows stand North Hill, Minehead and the Somerset start or end of the South West Coast Path. From there, it’s a 630-mile journey around Devon and Cornwall to reach the terminus in Dorset.

I’m always saddened to find evidence of fire pits along here. A behaviour I’ll never approve of. At the very least, they could clear up their mess afterwards and dispose of the ash in a more environmentally-considerate manner.

My views towards this power station have relaxed a bit in the last couple of years. I’ll never fully support nuclear power and would rather see the investment towards natural resources, in an area that experiences the second (or third) highest tidal range in the world… But the project has no doubt benefited the local economy. I find the scale of it to be incredible, with all the on-site accommodation, park-and-ride centres and petrol stations that have been built to support the workforce.

Sadly, the true coastal path behind the power station remains closed to this day – despite the fact that it was originally due to reopen in 2019… Hinkley Point C is writing its own saga. I have read online that it is “due to reopen in 2021” but, I’m not holding my breath just yet.

So, I followed the well-marked inland diversion and now walking south, back in the vague direction of Nether Stowey. By now, I was at least halfway in to my walk.

Again, I find the scale of this project to be staggering. I’ve no idea what they’re digging or why. But it looks as though the project is still some way off from completion.

‘Rons Bench’ provides a reasonable view of the ongoing construction. Those lamp shades contain a ‘tacky’ material that I believe collects air particles, which can then be taken away, assessed and analysed to ensure there’s nothing deadly in the air we live and breathe.

Moving on and I swiftly passed through Shurton, wondering where I might soon stop for lunch. That rain was intermittent, while the wind blew fast and furious.

I found a couple of benches beside a playing field, to the western edge of Stogursey. It was windy as you like by now but I took my opportunity, while a few boys finished their game of football.

As I moved to sit down, I’d spotted a 20p coin through one of the slats. Rescued from the ground below, I decided not to claim it as my own. But to leave it to one side so that it may brighten another person’s day.

After lunch, I marched on with pace to try and recover form the onslaught of that wind. I met a surprisingly muddy stretch along Wyndeats Lane – after having removed my gaiters earlier, as the state of these fields and landscapes was otherwise pleasantly dry.

Crossing one field and these sheep hoped I had arrived just in time for a feeding.

I could see Durborough Farm ahead but the Way, thankfully, wouldn’t run too close to the buildings. I was barely thirty metres above sea level and this wind was ridiculous. I felt I’d made the right choice in not heading for the higher ground of Exmoor (as much as I’ve been missing that National Park).

A few farmer’s fields, grassy paths and I’d be re-crossing the A39 on my return to Nether Stowey.

In a way of irony, I soon passed the pub where my car was waiting… To continue steeply uphill – by far, the hardest climb I had faced all day – in the pursuit of reaching Stowey Castle.

Eventually, I made it (if indirectly, due to my own errors). That same road follows the start of the Coleridge Way – a trail of around fifty-miles in length that I’m still hoping to walk this year, with Anna, on another conjoined journey to Lynmouth.

Of course, it was up on this hill that the weather finally took a turn for the worst… That southerly wind bought bullets of hail in my direction. I took as much time as I dared but wouldn’t linger for too long on such exposed ground.

There were public toilets beside the local library on the way back down – both of which were closed. There’s a small car park there – most of which is reserved for library users only. Car parking in Nether Stowey can be hard to find, as anyone who’s visited Coleridge Cottage will surely know.

I’m pleased to say that I have now completed the Castles and Coast Way. I haven’t read much about it from other people online and I like to think that I’m a bit of a ‘pioneer’ with this one… Being much quieter than any part of the Quantock Hills, I’d say it’s well worth exploring. It was created largely to attract people to that ‘undiscovered space’ between the hills and the coast.

Length of this walk = 13 miles

2 thoughts on “Walking the Castles and Coast Way”