This walk finished only a handful of hours before the state of ‘Lockdown’ was thrust upon the UK (even if the government aren’t naming it as such). At the time, it was debatable whether I should be driving forty-five minutes from home to go for a walk; now, it’s clear that I shouldn’t.

This will almost certainly be the last decent walk I’ll have done for many weeks. It was also a chance to discover a few miles of the Cotswold Way that I hadn’t seen before.

My plan was to drive to the start point, outside the church in North Nibley and that a friend from Bristol would meet me there – we’d at least taken the precaution of travelling separately and no sharing the small space of any car. Throughout the day, we’d also be practising the art of ‘safe distancing‘ while remaining social.

There was a bit of confusion initially as to whether or not we could get that far, due to inconvenient ‘road closure’ signs exactly where we needed to be… But I saw one car exiting on to the main road as I drove past, decided to take the chance and made it through. Also immediately after that, we joined the Cotswold Way and headed up towards Stinchcombe Hill.

Before the end of the day, we would visit the Tyndale Monument, which you can see above. Days before this, I’d penned a very similar route starting from Wotton-under-Edge, where long-stay car parking can be an issue… But when I found this route in original Beyond Bristol book, I decided we would go with it. Avoiding the town altogether meant a reduced exposure to other people and the risk of catching or spreading this invisible virus. 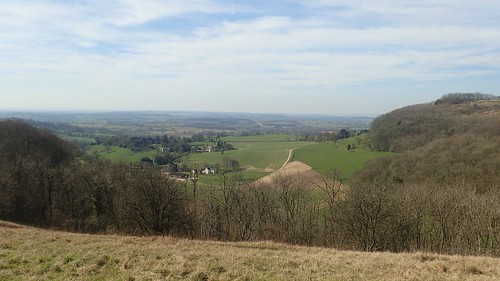 Over the years, I’ve been on several walks around this area, often starting from Wotton-under-Edge. To the north, I’ve also been on walks that start close to or pass through Dursley. But somehow, I’d completely missed Stinchcombe Hill, standing patiently in between them both.

A bit like Cleeve Hill near Cheltenham, this sight houses a golf course on its exposed plateau. A popular place for dog walkers, as the original Cotswold Way path follows around its irregular-shaped outline. On a good day like this, good views were guaranteed.

We hadn’t passed many people before reaching this hill. Dog walkers kept their distances while we met one group of three people sat beside the view at Drakestone Point. After weeks of named storms and generally wet weather, to be out only a dry and sunny day like this was a real treat. It wasn’t very windy either.

If you don’t wish to trace the wibbly-wobbly line of this hill, there is also a permitted Cotswold Way shortcut that misses most of it (including the trig point) on a very direct route to or from Dursley. Whenever I get around to walking the trail in full, I’ll probably take advantage of this, now that I’ve seen the rest.

I hadn’t walked so close to this area in nearly two years, when I last met up with a friend from Nailsworth and we followed the Way across Cam Peak and Cam Long Down, which can be seen in the photo above.

We would soon leave the Cotswold Way and follow a series of paths through woodland (partially getting lost and having to resort to using GPS), while heading in the direction of Breakheart Hill. One dog walker in the woods made the remark that ‘everyone from Bristol’ seemed to be out on this day… We both remained tight-lipped!

I didn’t take many photos while walking without the Cotswold Way but we had lunch on the downward slope of Heartbreak Hill (which I’d wrongly misread as being an ascent) in a spot that was mostly secluded from the cooling breeze as we basked in the sun (only to later find that we did indeed get sunburnt). 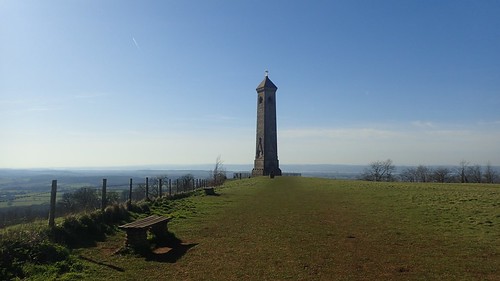 From the elevated walk along Combe Hill and above Wotton, we’d rejoin the Way in to Westridge Woods and, from the other side, we’d meet the Tyndale Monument; a tower that is now in the care of the National Trust.

I’d been up it once before and would always advocate carrying even a small torch for the dark sections of the spiral staircase (also be prepared to feel a bit dizzy). I’d expected to find the place closed to the public, after recent news that the National Trust were now to close all of their outdoor spaces due to overcrowding… But, no. We were still free to climb up and, furthermore, there was no infected person waiting for us at the top. 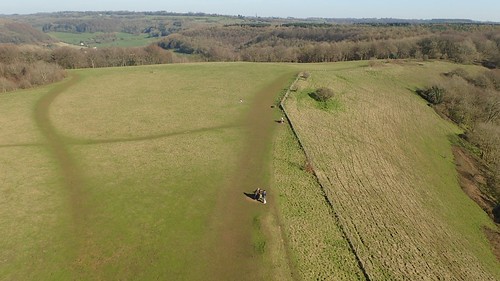 Had we come up here one day earlier, I’ve no doubt the place would’ve been packed with walkers. This was a weekend after which the government decided to impose the inevitable ‘Lockdown’, as too many were treating the situation as if it was an unexpected holiday with the freedom to travel and do as they like during their time off. 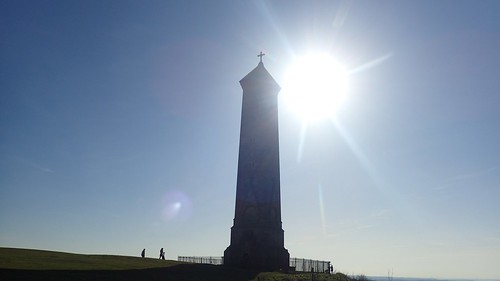 We soon dropped back down to North Nibley and departed with a desire to meet up again and soon. Then of course, the government made their announcement that same evening. It wasn’t entirely clear at first but travelling from home to exercise and meeting up with friends and family was no longer legal.

Again, you can find this route in the Beyond Bristol books.

We’re almost at the end of this first very long week and I’m still struggling to adapt to spending too much time indoors. Walks from my own front door (whilst trying to avoid the masses) are essentially limited to one of two routes and there is no clear guidance from the government on how long we’re allowed out for or how far we can travel on foot or bike.

I don’t wish to make this a post about politics and may write something similar. But I do feel that the current restrictions are about to be increased as people up and down the country continue to push their luck. I recognise the seriousness of this virus and hope we’ll be back to lives of freedom in a matter of months.

Distance of this walk = 10 miles