I’d walked close to twenty-miles on this day, before finally arriving at my pitch for the evening. Up on Ditchling Beacon, the rain had finally come in and, even along my descent towards the next village, I could not escape it in time.

While there would be no wild camping involved on this night, there’s a bit of a story to tell on where I stayed…

I’m making a deliberate effort not to name the place at which I found my accommodation. If you are curious, I reckon you could find it easily enough using the National Trails website and their ‘Plan Your Visit’ interactive map. There is next-to-no information available on this place online and I’ve not seen a single review. So, while I could provide assistance and guidance for many people planning their own walks along the trail… I don’t wish to publicise the only review and for it to be read in an unfavourable way. 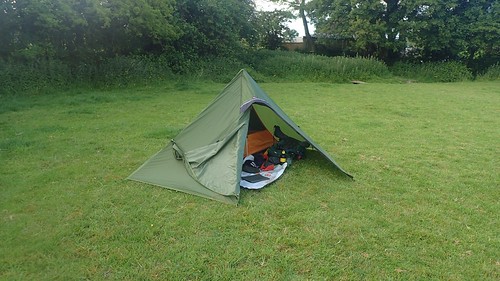 I was looking for a barn in the village of Westmeston. I walked up and down Underhill Lane but could not see a clear sign or indication. There was a wooden sign for ‘The Barn’… But this was no it. In actuality, the pin location on the National Trails page is quite accurate, although not perfect.

So, I phoned the lady and asked for directions, while paused and confused at the top of the driveway to what was the correct route… I mis-read her directions, walked off down the road when I should’ve followed the track and made another phone call…

She sounded frustrated, which was understandable, as much as I was confused. But I soon found my way back on to the right track and still managed to walk past the sign. It didn’t look like your typical campsite entrance (there wasn’t even a ‘door’, as such) and I had written down the wrong name, after all. 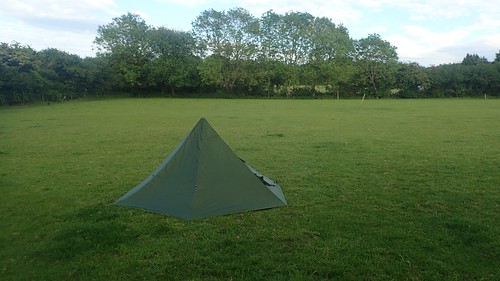 As the only person in attendance, I was charged £7.50 for the one night, as opposed to the £7 tariff stated online. Being charged more than expected was becoming a theme of this trip!

I’d advise you to carry the correct change or prepare to make a ‘donation’, if you do intend to stay here. Change may not be available and, while she was able to reimburse me the full £2.50… It was mostly made up of 2p coins! I probably regained as much weight in my pack as any meal consumption would otherwise have saved. 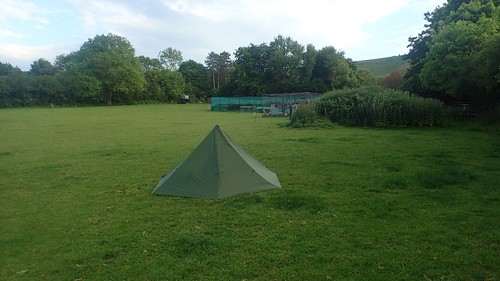 I found myself pitched up in a field behind horse stables. In his own area was my neighbourly horse. Duncan, I think his name was. He was frightened by the sight of me. Two occupant dogs were also present with the site owner and it would be possible to purchase fresh eggs courtesy of the chickens in the morning.

It was a peaceful pitch. Undisturbed overnight and I had many square metres of space and time to myself. With a stream running behind me, there were midges present as the sun went down – speaking of which, the sun burst out from behind the clouds in the same moment that I touched down on the tarmac.

Now, let’s talk about the facilities… 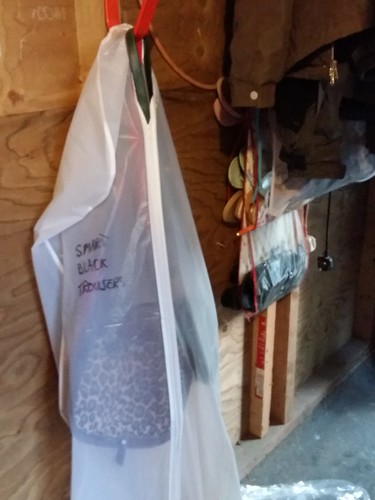 In amongst the stables was a structure containing the hand sink and toilet, along with some of the lady’s personal belongings. As ‘minimal’ as the setup was, there was the rare-find of a kettle, which did save me some gas. 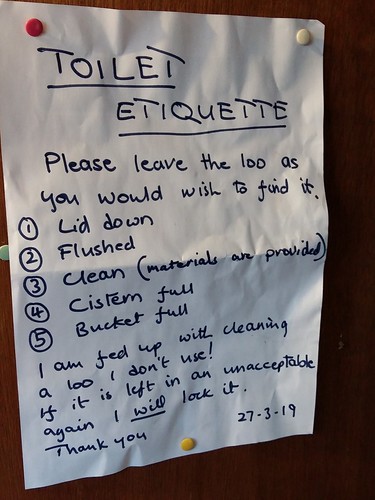 While the plumbing was in place physically, the water had been turned off, for whatever reason (I didn’t ask). Once you’d pulled the flush, it went like this:

Take the bucket out to the rainwater butt and fill it (this takes a good five minutes). Fill the toilet cistern. Fill the bucket a second time (another five minutes) and leave it beside the loo (ironically, the cistern was empty as I arrived). Then clean the toilet… Which I’ve never had to do before in anything other than an AirBnB property!

I’m not sure how I was supposed to wash my hands with no running water but I always carry hand sanitiser. Drinking water is provided from a large water bottle (the type of which you would find in a supermarket). There was plenty there for my evening and morning meals. 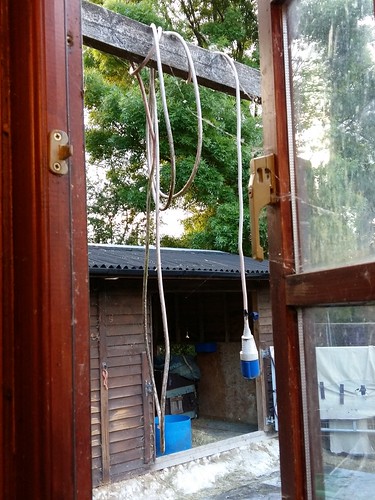 View from the shed. Possible noose from which the previous occupant hung themselves.

My original plan had involved staying elsewhere but, having left things quite late, I found the other sites were already booked up or, bizarrely, not open on a weekday when the kids were off school. 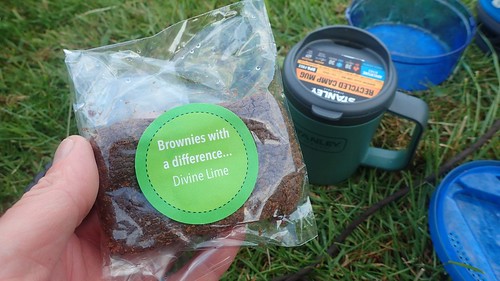 All weirdness aside, I’d held on to Emily’s home-made brownie to accompany my cup of tea. 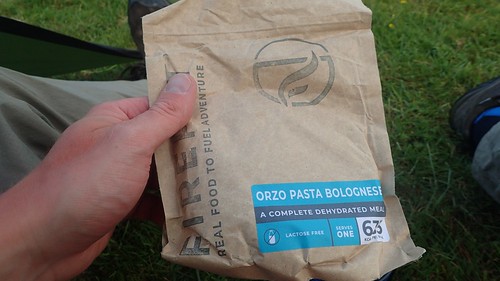 Then for dinner, I would opt for Firepot’s orzo pasta bolognese from one of their new compostible bags, as a more-environmentally-considerate alternative to plastic. 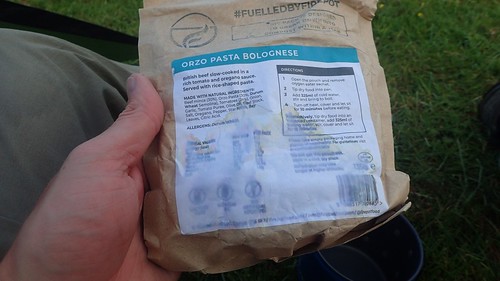 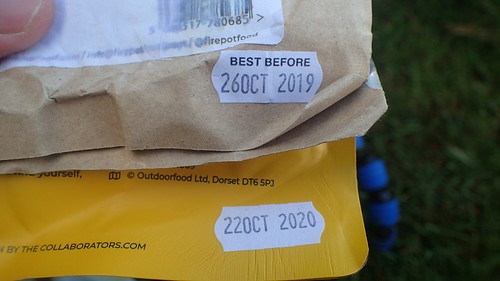 While these bags are not waterproof and need to be kept dry, it may also worth noting that the shelf life between these two packs was twelve-months apart. 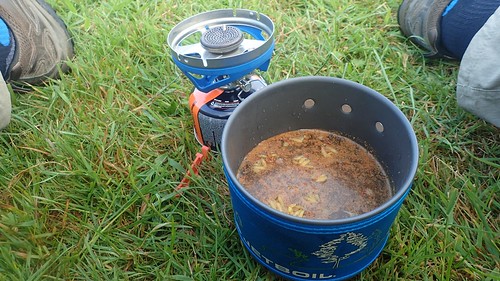 Although the idea of packaging that won’t out live your own life is a very positive step forward, the biggest downside (depending on your preferences) seems to be that you cannot ‘boil in the bag’ with these. Instead, you must place the dry mix in to a pot or pan before adding boiling water.

Some voices suggest that you can use oven bags and I have purchased some to experiment with this… I just didn’t fancy potentially ruining one of my meals along the South Downs Way. I’m also not sure of how the owner would’ve reacted to a mass of congealed bolognese and plastic being found on her land the next morning!

I was very happy with the outcome and, as these new packs don’t cost anything extra, I will be looking to use them in the future. 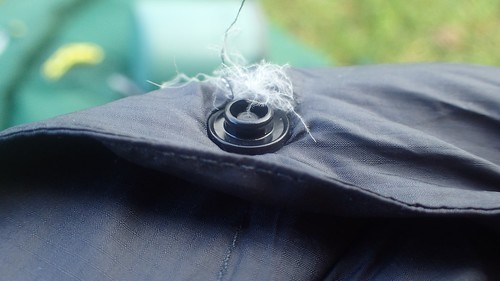 Only days before heading out and on to the South Downs Way, I splashed out on a down-insulated quilt from Alpkit; the Cloudcover. This seemed like a good lightweight option to my ‘Ultralite’ two-season sleeping bag.

Unfortunately, I’ve made the mistake that many people complain about in the reviews, where I pulled the material to separate the poppers, instead of the poppers themselves… Which has resulted in this tear and the loss of a few feathers. I’ve currently duct-taped over this for the time being, unsure of how to make a better repair.

In all, it wasn’t a terrible night’s camping and another tale to tell from my journey across the South Downs! It was only one night and, looking again, I can see it wasn’t the only option available close by. It wasn’t far from the trail.

If you are thinking of staying here, just be wary of the ‘minimal’ facilities available and the likelihood of a dog jumping on your tent in the morning!

On to Day Five!