This past weekend, I spent my time camping in Cheddar with the Outdoor Bloggers group. While it was only a short drive from home (and not an area in which I would usually look to go camping), it was also my first time meeting anyone from the group.

Two years ago, I probably wouldn’t have done this, through fear and anxiety. But I’m pleased to say that I have been. I’m going to share some of the highlights with you now and I look forward to meeting up with them all again in 2020, if not sooner. 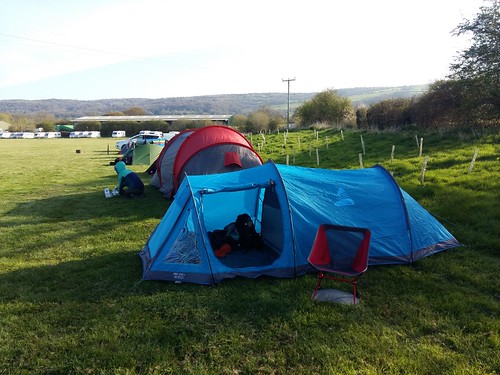 Historically – and, provided I remember correctly – this annual spring camping event has been going on for four years. Each time previously, the location would be much further north, with Snowdonia and Yorkshire being the two locations I can recall. At the request of more southern members, this year’s event came down to the Mendip Hills and, as voted for via a poll on Facebook poll, it topped the list ahead of Shropshire and the Forest of Dean.

Friday was our day of arrival. I was fortunate to have the afternoon off work, which would allow me enough time to finish packing and to then arrive in good time. Some would not arrive until later in the evening, depending on where they were travelling from (this event was not restricted to southerners). I’d also been asked and kindly offered to collect three London-based bloggers from the train station at Weston-super-Mare (which is only a fifteen-minute drive from my home) and I’d get to meet Seanna, Cristian and Daniela ahead of anyone else. 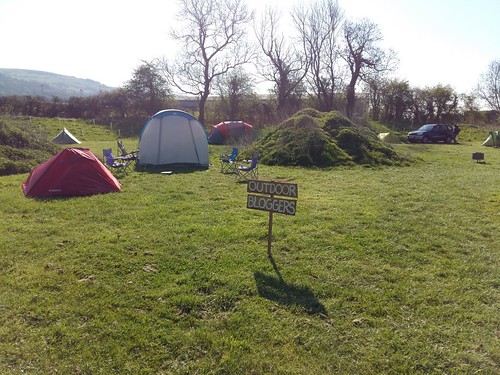 There was time to pitch up, meet people, make dinner and settle in for the night – I may write more on the campsite itself in a separate post. We stayed at Petruth Paddocks, just south of the centre of Cheddar and off the A371 road heading towards Draycott. 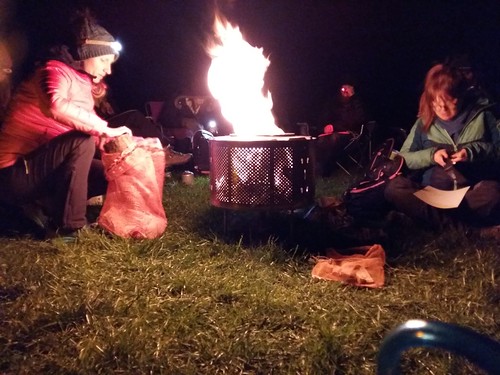 While I had felt compelled to go along for the sake of this event being less than a thirty-minute drive from home, I had a great fear of what it would be like to camp in April – having never previously camped any earlier in a year than May (and to have still found those evenings to have been cold). But I’d packed and prepared for it with my layering system and sleeping kit setup. We had a fire going each night which kept us alive until bedtime.

We woke up on the Saturday morning with many discussions about how cold it had been the night before and how well we each had or had not slept – in that exceedingly British way! After breakfast, we would be walking in to Cheddar (maybe a mile from the campsite) to begin our exploration of Cheddar Gorge. 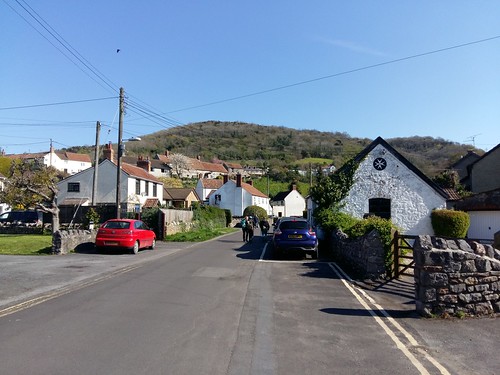 For the majority, it was a first time visiting Cheddar and the gorge (which can be expected, with bloggers arriving from places like Yorkshire, Derbyshire and Nottingham). This is a place I often take for granted because it has always been on my doorstep and I know that it gets quite busy on a weekend. In short: I don’t often venture here alone, anymore. 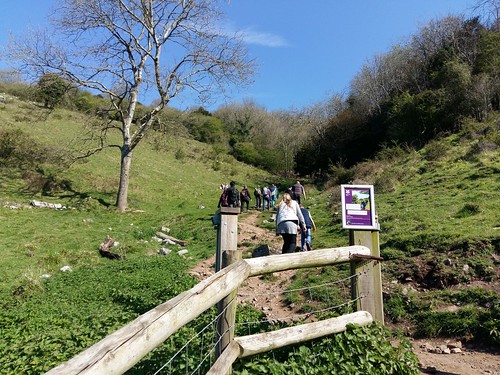 We would join the National Trust’s Gorge Walk route and the punishing ascent up towards the northern cliffs. I still maintain that this is one of the hardest ascents in all of the Mendip Hills… I place it up there with Batcombe Hollow in Draycott, the steps of Ebbor Gorge and the valley that cuts through Rodney Stoke Nature Reserve. 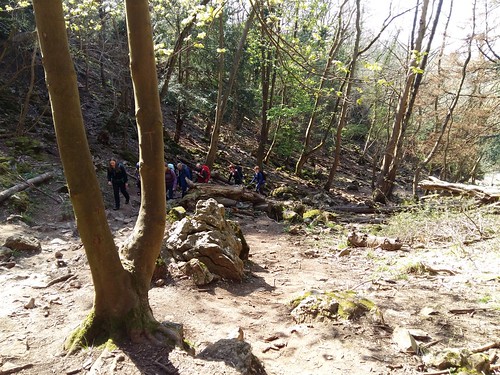 Everyone did well to reach the top. Some were faster than others, which is to be expected in a group situation. Especially when it wasn’t strictly a ‘walking holiday’ but more a chance to meet other bloggers in a series of outdoor situations. 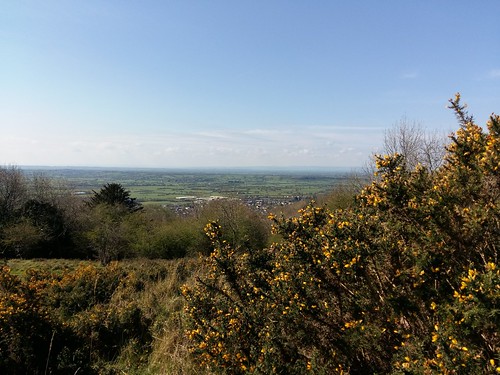 Among the many items that I packed but did not use across the weekend, my digital camera remained zipped away in my hip-belt pocket. All of my photos were captured using my smartphone. 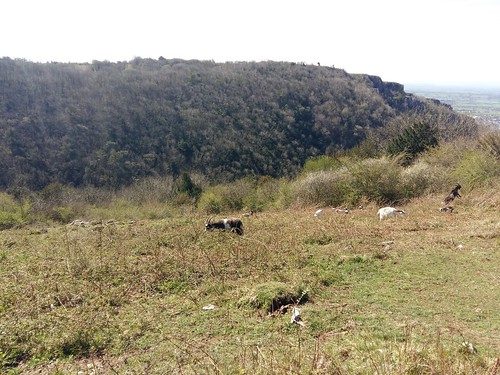 We found goats on this quieter side of the gorge. 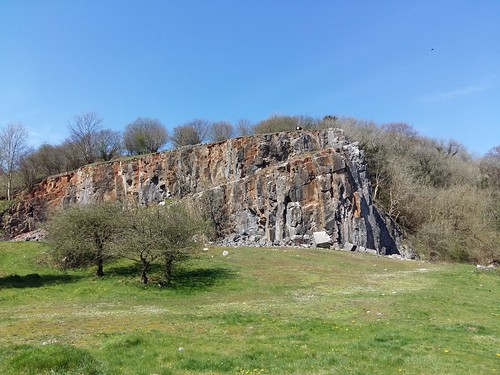 Weather-wise, we were set for a dry weekend with blue sky to brighten each day. Descending from the northern cliffs, we followed the West Mendip Way past the iconic Black Rock. 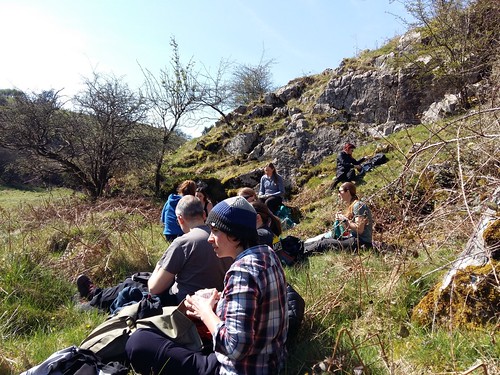 It was within Velvet Bottom nature reserve and away from the path that we stopped for a deserved lunch break, having found a suitable spot sheltered from the slightly chilling wind. 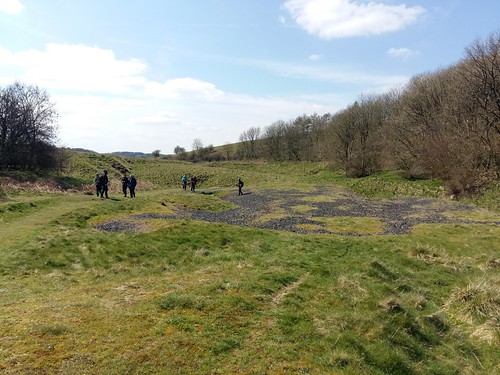 After lunch, our walk continued in the direction of Ubley Warren, where we all admired the shiny rocks beneath our feet, in an area that was once a hive of mining activity. 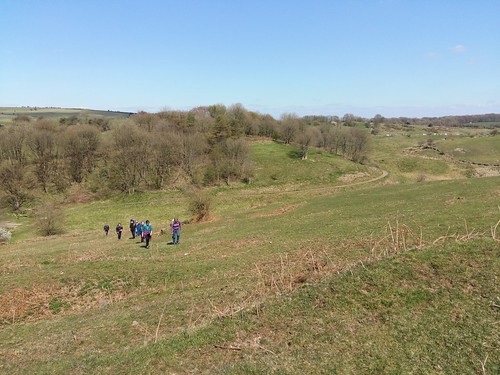 To my surprise, we turned to climb up and away from the valley floor. A path I’d never previously walked! In all my seven years of roaming the Mendip Hills… My senses were alert! Head up, eyes open. 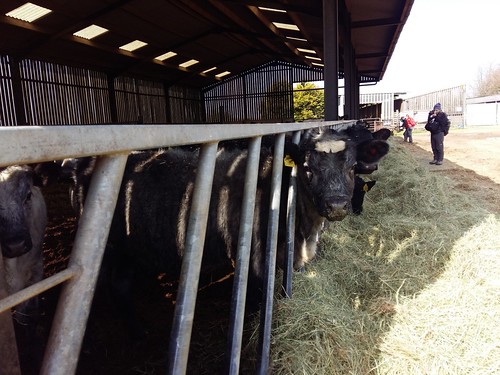 We passed through Warren Farm, where we found the cows were still locked away. Many of us know that their day of freedom shall soon be upon us. 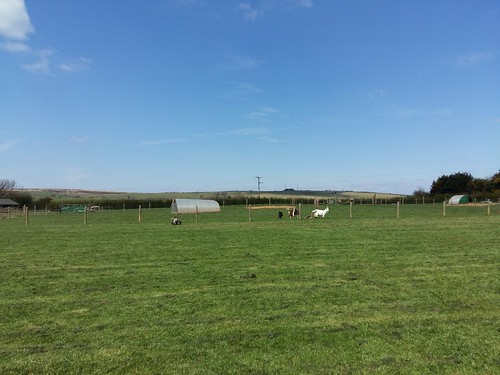 Rightly or wrongly, we made our way across a field that appears to host holiday lettings accommodation. Away to the north, I recognise the shallow heathland hump of Black Down, bearing the highest point in all of the Mendip Hills. 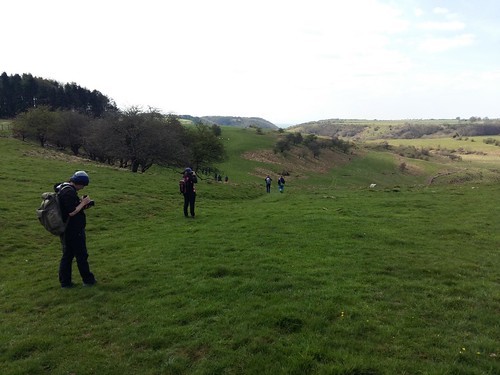 We would soon descend towards Black Rock and rejoin the West Mendip Way in the opposite direction; not to cross the road and cliff up on to the southern cliffs of Cheddar Gorge. 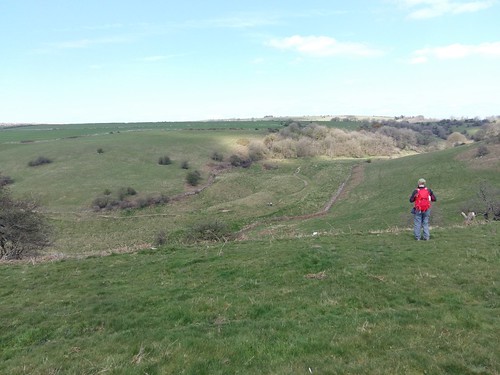 But some of these views from up above Velvet Bottom were stunning. Sights I’d never seen before. Neither had I previously noticed any other walkers treading this way. 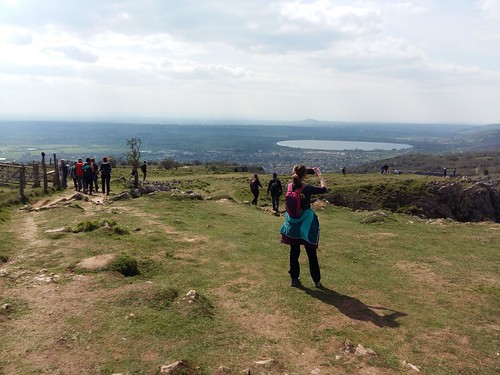 Further exertion along a rocky path was required before we met with these superb views overlooking Cheddar, its man-made reservoir and much of the Somerset Levels.

On a bright and sunny day, it was understandably busy. With blogging in our blood, we took the time to take photos, as we had already done for much of the day. It took a moment for me to recognise two other visitors to the gorge on this day; wearing jeans and not the characteristic waterproof attire… Neither of them were equipped with backpacks or walking boots. But both were members of the walking group who I’d not seen for several months. 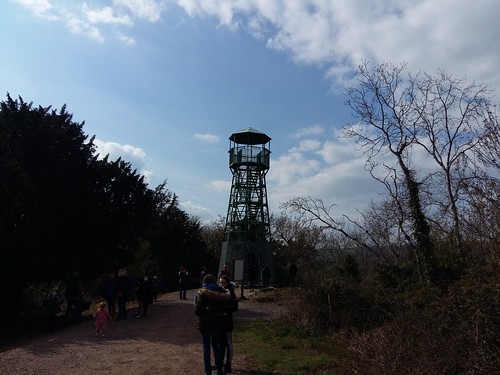 A number of us took the time to climb Pavey’s Lookout Tower before descending towards the start along Jacob’s Ladder. 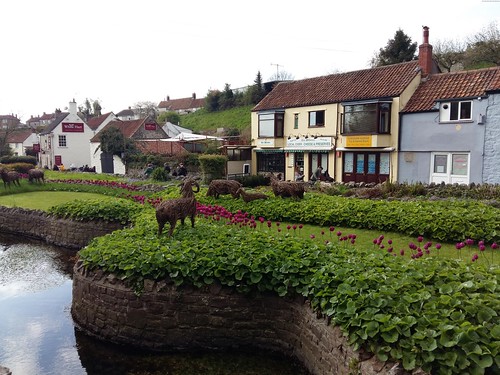 Returning to the hub of the village, filled with shops selling fudge, cider and ice cream; we had time to explore the area further before strolling back to our home for the weekend. 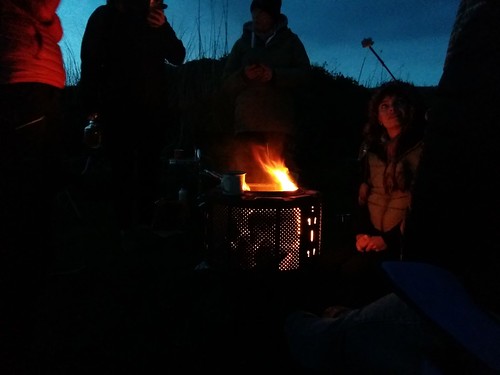 That evening would be our last at Petruth Paddocks. We listened to talks from several Outdoor Bloggers members, sat around for dinner and got the fire burning one last time. With clouds in the night sky beginning to part, it was needed even more so than Friday evening!

A shorter walk for our final day and with the absolute minimum of elevation would see us skirt the southern edge of the village to reach Cheddar Reservoir [some dwellers in neighbouring Axbridge maintain that this is ‘their’ reservoir…]. 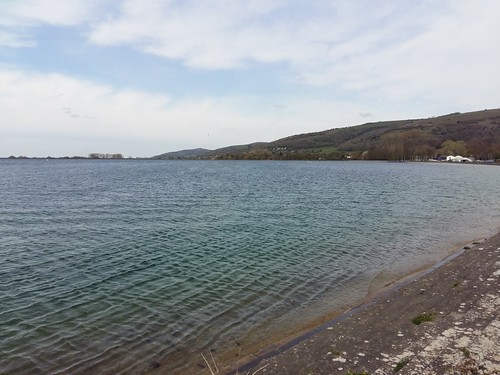 A surfaced path follows the two-mile circumference of this man-made structure. Which is more than you might find at the neaby lakes of Blagdon and Chew Valley. 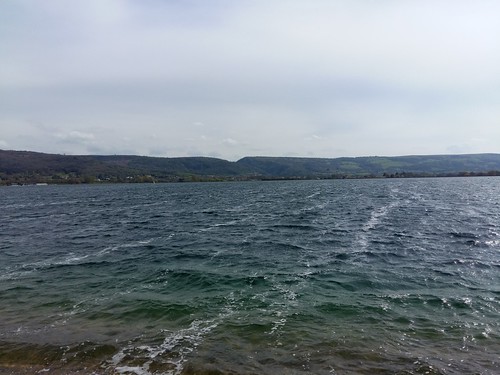 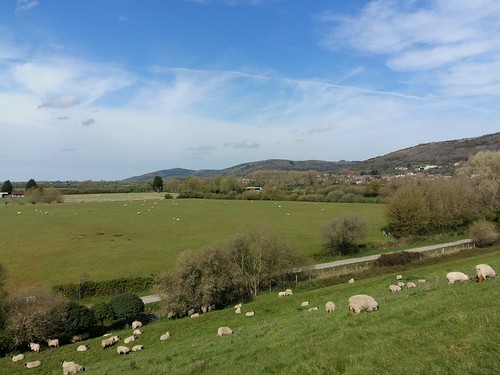 While the water was there to be admired, visually and heard, with its waves crashing against the brickwork; greater views could be found, looking west along the ridgeline towards Crook Peak. 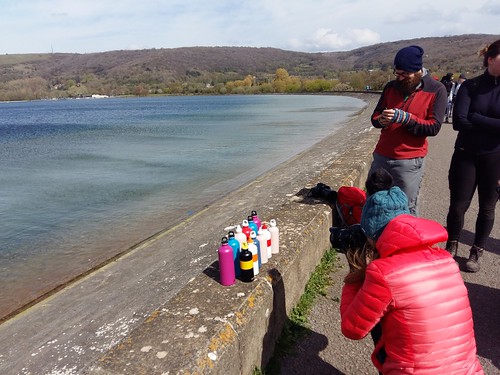 Before returning to camp one final time, we set up our kindly gifted bottles for a photo shoot. 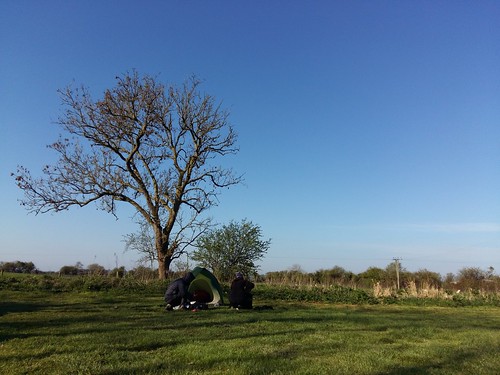 Back at Petruth Paddocks (where the owners did not pressure us to leave before any set time), we sat down for lunch and shared our Scavenger Hunt findings, with a prize (eventually) awarded to the winner. It’s the kind of moment you wish you could have captured on video… Let’s just say that Becky was very determined to find something blue!

Eventually, we would resume and conclude with the collapsing of tents and loading of kit in to the boots of our cars. Followed by warm goodbyes and positive intentions towards future events. I’d certainly like to do this again – although I may draw the line at three hours of journey time for nothing more than a two-day weekend. 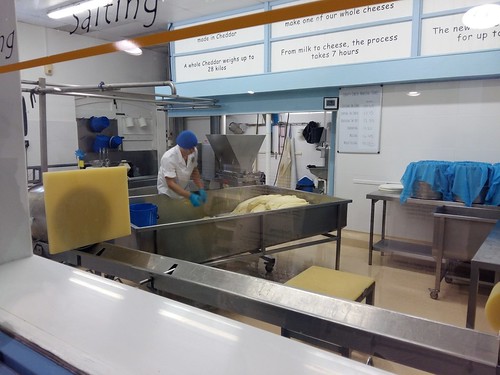 At the request of my passengers and fellow bloggers, we returned to Cheddar briefly to learn about how traditional Cheddar Cheese is made by hand. At a cost of only £2 each, it was worth and still something I’d never done before! 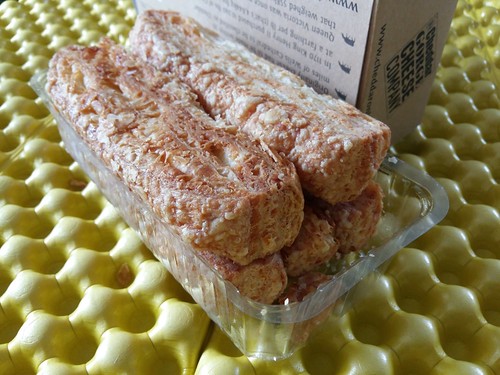 I even left with a box of cheese straws in my possession, where I’m usually too tight to spend money on anything that doesn’t contain chocolate. They were as good as they look and went down well with a single cup of tea back at home!

I dropped Cristian, Daniela and Seanna off at the seafront in Weston-super-Mare, where we said our goodbyes. Again, I take this space for granted… While it’s not something that would be easy to find in any part of London for the other bloggers! I was pleased that they were able to experience so much in to their weekend and impressed to learn that the train journey is barely three hours long, which probably puts it on a par with driving all the way.

…All of this and I haven’t even mentioned the goody bags (yes, an actual backpack) that each of us were given, filled with many interesting gifts from the group’s kind and generous sponsors. I’ll document all of that in more detail, soon.

I’d like to finish by saying a great THANK YOU to the spring camp’s organisers, Zoe and Jenni; to the owners of Petruth Paddocks for their hospitality and to everyone who came along on the weekend for being incredibly kind, friendly and interesting people.

Everyone who attended, excluding my own name: