It was the beginning of a four-day weekend in Devon, where I would mostly be joining Brunel Walking Group on their annual “Christmas” away weekend. Where we travelled to Pembrokeshire in 2017; this year, we were destined to explore Dartmoor.

These were to be my final few days of freedom before starting a new full-time job, having spent much of the previous five-months with somewhat of a ‘flexible’ weekly schedule. None of the group’s official walks would begin for another day. Thursday, as it is every year, was an opportunity for the early-birds to arrive.

I’d booked myself in to an AirBnB accommodation a few miles north of Okehampton and away form the (many) others. Unable to check-in there until later in the day, I drove down early, with the aim of avoiding any horrors in the motorway traffic and making something of my day.

So, I drove to Meldon Reservoir and without the aid of satellite navigation. Just as I had done in May… Only, I took a very wrong turning somewhere and ended up halfway to Lydford before I could convince myself that turning around (in defeat) was the only sensible option. 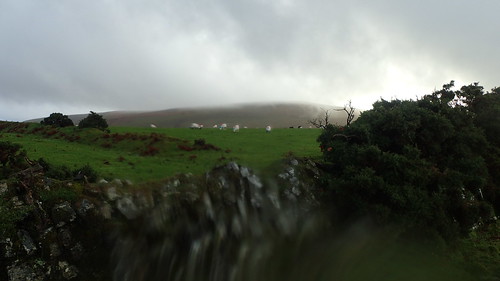 I put a £1 coin in the parking meter and I think that permitted a three-hour stay, which would allow enough time to get up to one tor and back again. My original plan had been to arrive much earlier in the morning (it was now lunchtime) and do a longer walk but, with the weather forecasts, Yellow Weather Warnings and the eye of Storm Diana… I decided to spend an extra hour or two in bed and clean my home before departing for the long weekend. 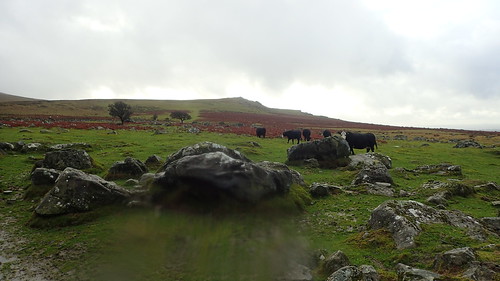 My destination was Sourton Tors, which rises to an elevation of 440 metres above mean sea level. A summit I visited during my walk back in May. An occasion of which, I’d accidentally left my camera at home and wasn’t geared up for filming or capturing much of the day. 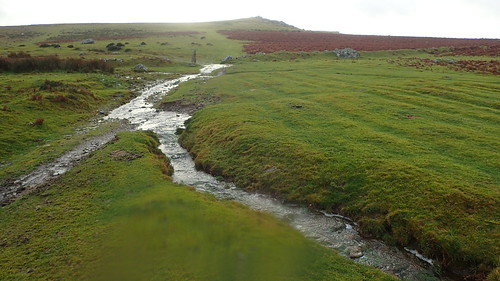 My route initially joins the West Devon Way and leading on to Open Access Land. It’s very easy to follow and clear to see from the map, before the inevitable climb begins up to the tors. 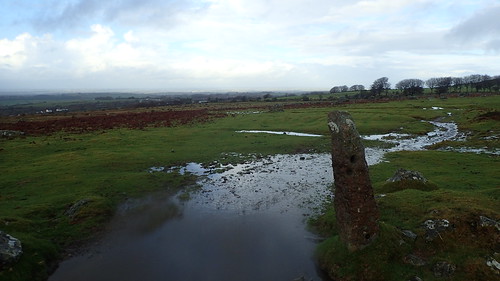 For most of the way, I was following a bridleway. Except, every perceivable path on Dartmoor was running like a stream or small river. There was no chance of keeping your boots dry, while the showers would rain down frequently. 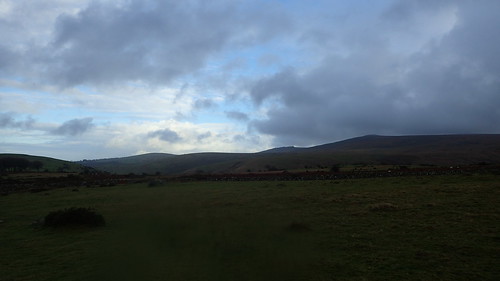 I couldn’t quite imagine what it might’ve been like on the higher ground, which we would almost certainly be covering as a group over the coming days. Wind gusts were already in excess of 40 miles per hour, making this a rather unpleasant place to be. 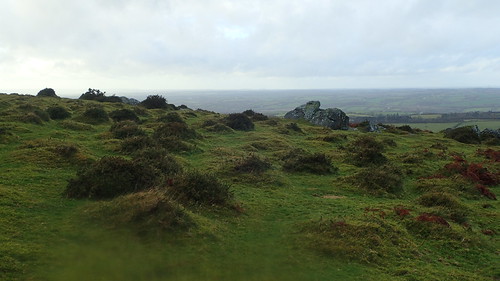 I’d seen a couple of people who’d parked up, paid and walked down to the dam that crosses Meldon Reservoir. As far as I could tell, I was the last human standing on this north-west portion of the moor. 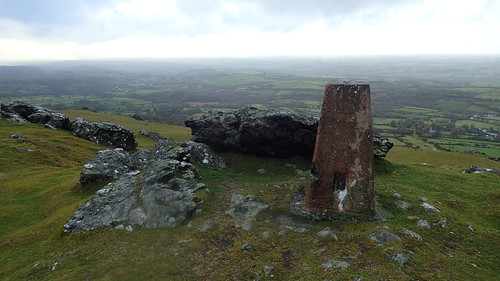 I reached the trig point in an act of triumph, almost blown from my in moments. 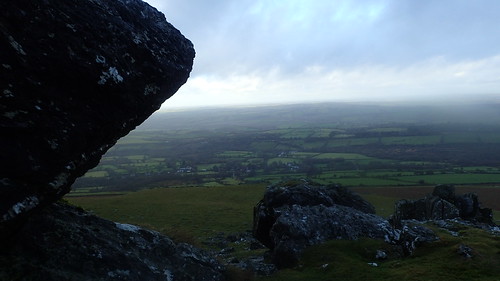 I found brief respite from the fierce wind and rain on the north side of the rocks. A moment or two to contemplate and to reflect. 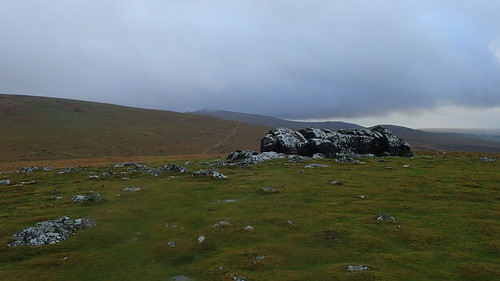 Had I arrived even one hour earlier, it’s possible I would’ve continued walking south to bag the trig point on Great Links Tor, which is one of the many others I’ve not bagged. Great Nodden would’ve been obligatory on that route, with a rise to heights closing in on Britain’s lowest mountains…

But that would’ve cost me another two hours in time and limited daylight hours. I always like to arrive at my accommodation before nightfall and I’d told my hosts to expect me at around a certain time. 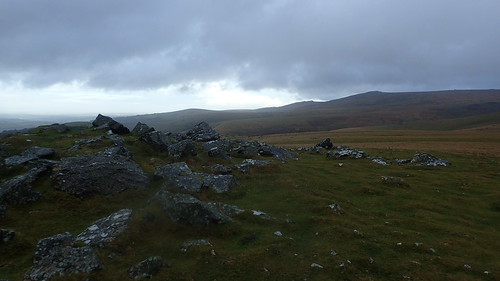 I was never sure of how I would’ve completed a circuit to and from Great Links. I don’t like to walk back on myself and, based on my tussock-filled experience in May, I would’ve preferred to avoid negotiating the Corn Ridge.

It’s something I’ll save for another day. If not a day-trip in itself, perhaps I’ll even make a wild camping weekend of it all! Although, it’s worth mentioning that overnight car parking is not permitted at Meldon Reservoir. 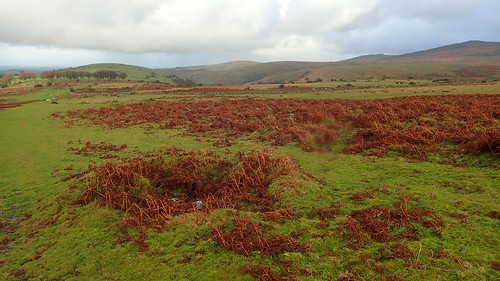 To reach Sourton Tors, which is higher than many points across Somerset; I’d walked only a couple of miles and would have the same distance to recover, heading back towards my car. 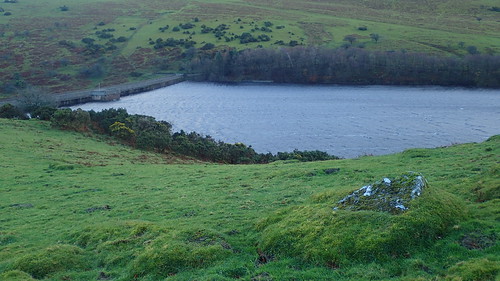 I did plainly retrace my steps, through every puddle and along each stream. When it came in to view, I decided to wander down towards the reservoir, as the water level looked very close to the top of the dam. 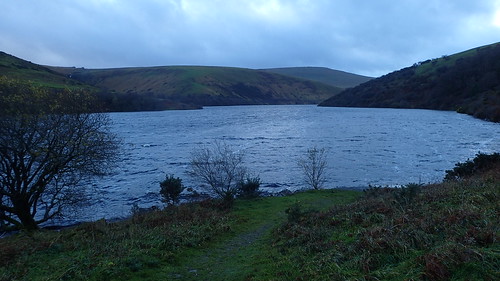 I may be wrong in saying this but, I can imagine Meldon Reservoir as being one that has formed naturally, where so many around the UK are man-made. Of course, the dam itself is an act of human intervention. 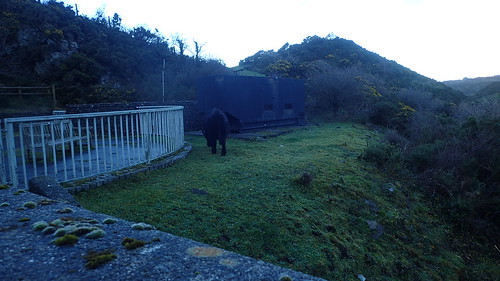 As it was, the water level was barely four feet above the top of the wall that borders the walkway above the dam. How this cow got to this side of the fence and in such a precarious area… I really don’t know! 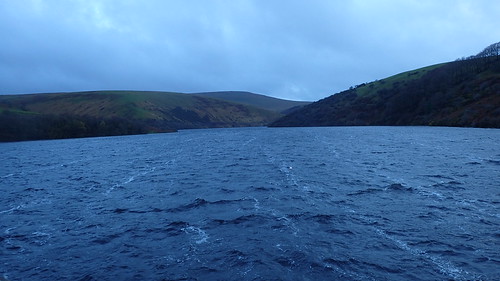 You could almost be mistaken for thinking I was somewhere else. Back in May, I don’t remember the water level being even nearly as close as it was, here, recently. Someone recently told me that, during the bone-dry summer, it dropped to less than fifty-per cent of its full capacity. 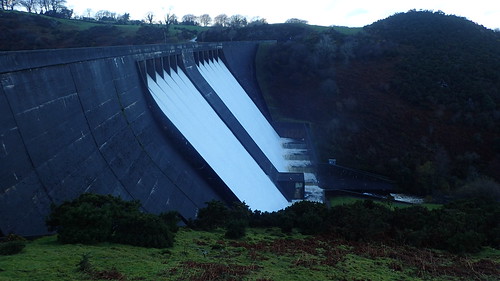 This site was awesome, along with the powerful sounds produced. 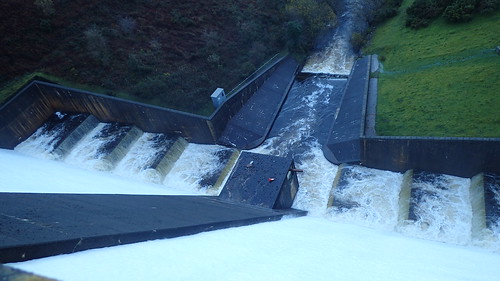 I’ve no idea how or why the orange traffic cone had reached that position. It would be a very brave, foolish a desperate soul to try and retrieve it at this time! 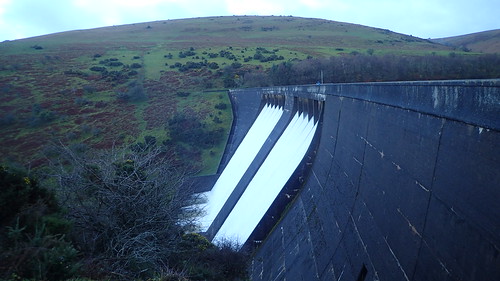 A few more people soon arrived, equipped with their own cameras or phones and ready to capture this feat for their own benefits. I guess the word had travelled fast, locally. No-one appeared to be kitted out for a day’s walking on the moor.

This was a gentle introduction towards what may follow over the next three days of walking on Dartmoor… Given the state of my boots and how quickly both halves of my waterproof layers had let me down!

Distance of this walk: 4 miles