As part of a weekend away in Cornwall with Brunel Walking Group, this was one of the two walks available on the first full day of activities. A longer and more challenging walk (further south and passing Land’s End) had already departed for the day, leaving the rest of us to car-share our way in to St. Ives for the start of our coastal walk. 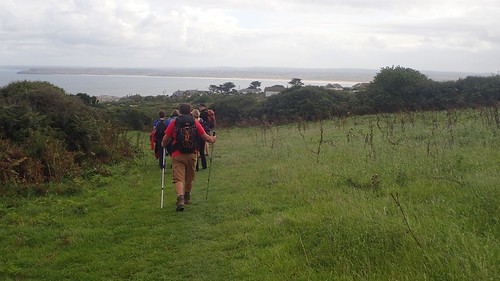 I was relaying the details of this walk to another group member (who wasn’t able to attend) last weekend. She stopped me immediately after my first sentence, noting that there was ‘something wrong’ with my statement along the lines of:

She’d explored this part of Cornwall herself in the past and she was even familiar with the route of our coastal walk. Most importantly, she knew that driving in to St. Ives is NEVER a good idea! With narrow streets and a booming popularity for tourists, we found the experience, of a group with three cars, to be worse than negotiating one of Britain’s many congested city centres.

In our efforts to stop at the first car park (which wasn’t actually that hard to reach), we found that all of the available spaces had been claimed (at a cost of £8 for the day), while the only vacancies were in the private and residential bays. There were very many of them!

It was when we attempted to find the next car park that we encountered streets barely wide enough for a single car, gridlock and inconsiderately parked delivery vans. 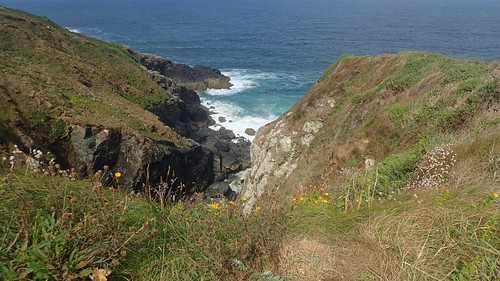 Plan C involved fleeing the town for a National Trust-owned car park on Trevalgan Hill (post code: TR26 3BL; OS grid ref: SW 487 394). There’s space here for probably ten cars at a push and we were able to claim sufficient room by parking one car in front of the other. I believe there’s a donation box asking for £1 to park here. Ironically, we were only a five-minute drive around the corner from our campsite at Lower Penderleath!

Finally. We began to mark our way north-eastward and to where we would join the South West Coast Path. St. Ives was no longer an option; we’d seen enough of the Bank Holiday Chaos that was rife there. Instead, I believe we joined the coastal path at Burthallan Cliff; having crossed a series of fields, mighty stone stiles and bridleways to reach it. 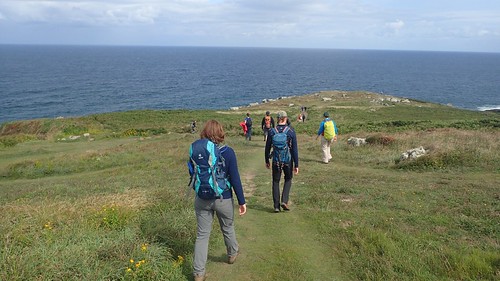 It was here that we had an almost-immediate break. Appreciating the views, the fact that we were in Cornwall for the weekend and that we had survived a morning of madness. 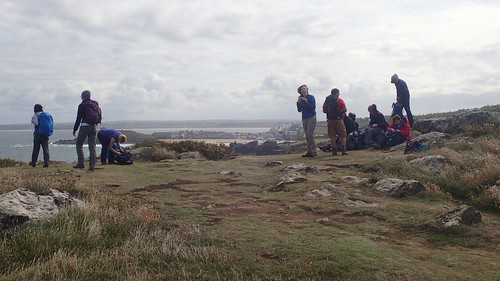 St. Ives was clear to see and, to be fair, it looked quite serene from this safe distance. Beyond that, Beyond that, the lighthouse on Godrevy Island and Godrevy Point, which would be a feature of two walks on the following day (including one that I would be leading). 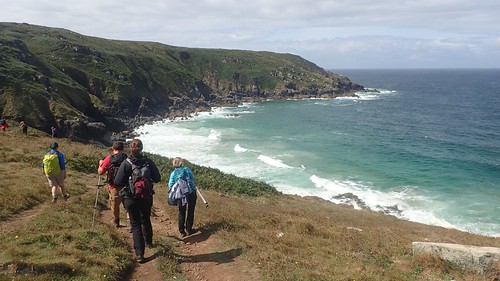 Our coastal walk would continue to the west. 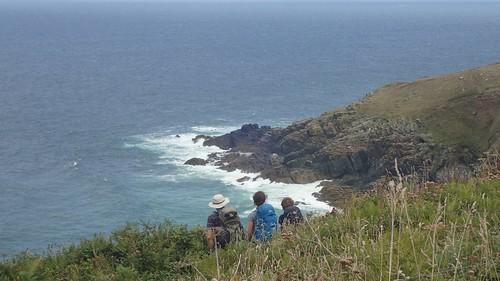 Of course, being in Cornwall in August, we weren’t the only ones to be seen walking along this stretch. I doubt any portion of the Cornish coast path would’ve been free of footsteps over the three-day weekend. I’ve been told in the past that it’s a popular destination for German hikers. 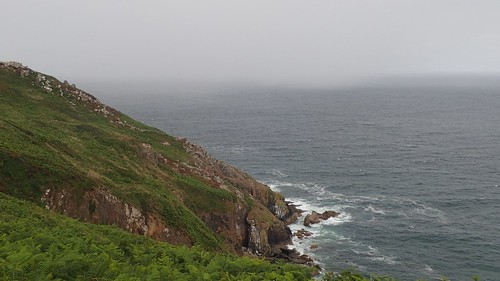 Our progress was fair and steady, considering that a coastal walk will often supply a degree of physical challenge and, although there was an absence of sunshine, our morning had not been unpleasant… Until we saw this dark wall of weather approaching! 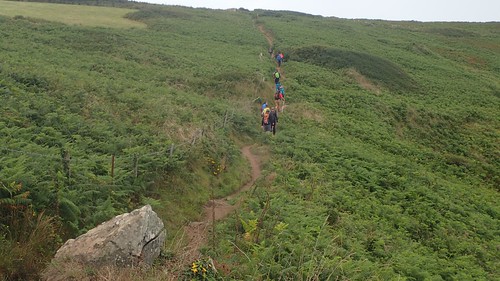 Jackets and waterproof trousers were hurried on, in an effort to save ourselves. I don’t remember the rain being torrential but, following the coastline, we were greatly exposed. 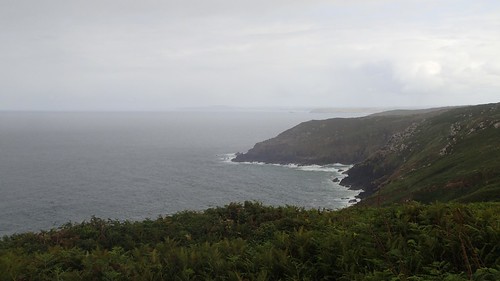 St. Ives and the coastline to the east would fade away beyond this veil of An Average British Summer. 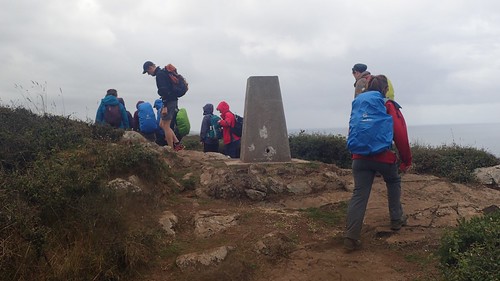 We were told we may encounter as many as three trig points on this circular walk and we met our first at Trevega Cliff; a mere 97m above sea level and just south of Carn Naun Point. 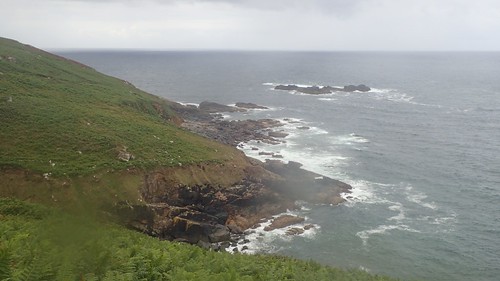 I made this remark to someone else within the group that day, about how rugged the Cornish coastline is and its resemblance to the coast of Pembrokeshire in South Wales. She agreed with me. 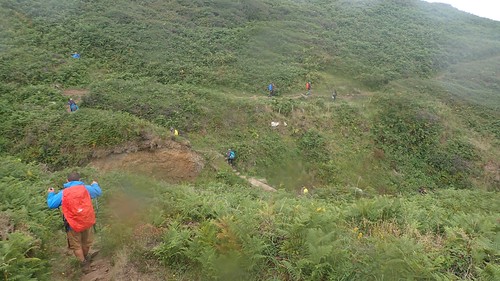 A tricky valley crossing was waiting for us shortly after the trig. I was pleased with this shot and how the line of fluorescent ramblers highlights the indirect right of way. But you can also see how greatly dispersed our membership had become (I was the last man). 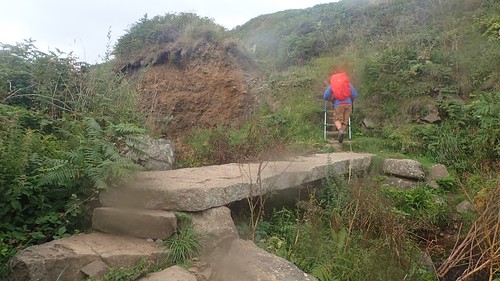 We crossed a clapper-style stone bridge to reach the other side. 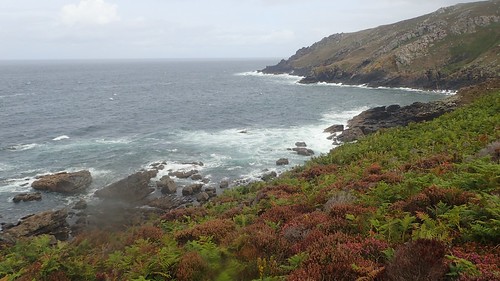 Beyond which, a tough decision would have to be made… 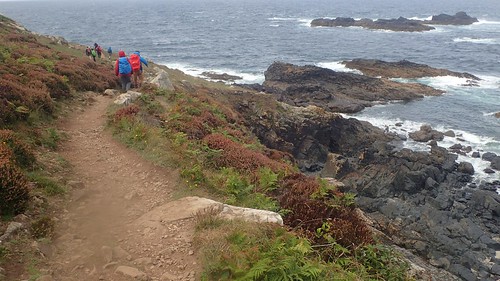 A concern was growing with our walk leader, as the inevitable lunchtime hour had drawn near and yet we were still some distance from our desired resting point near Zennor, from which we would depart the coastal path. 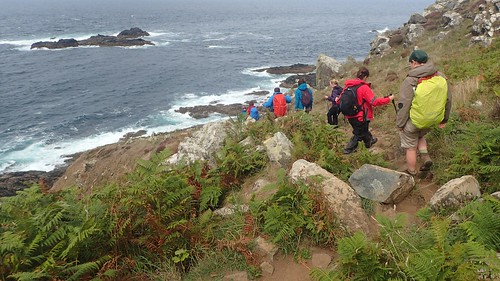 With a group of this size and of mixed abilities, there was a fear that we would be walking in to the early evening before returning to the cars. Yes, we’d lost time with the car parking issue but a brave decision was made to divide the group in two. 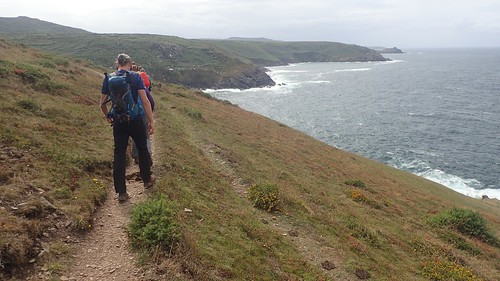 One set would return to the cars on an more immediate route and finish their walk for the day, while the rest of us would push on and quicken our pace, for almost a whole hour, before stopping for lunch. 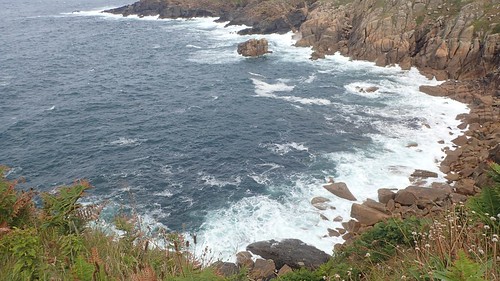 It worked our for the best. Seven departed back to the cars and with the right number of drivers and passengers, while the other half of us marched on. 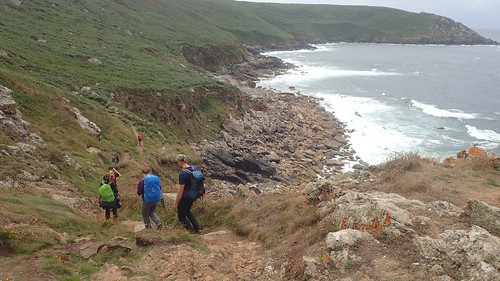 As the nature of the terrain ahead of us intensified, we realised even more so, that the best decision for all had been made. 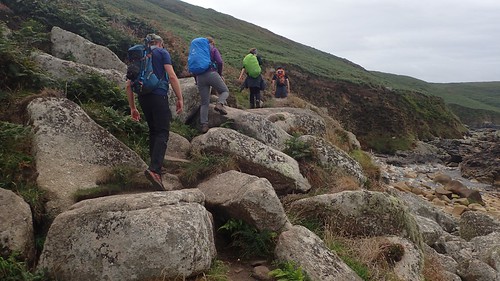 We weren’t just following a rugged coast path; we’d dropped close to sea level and were now almost scrambling over large boulders and treading from one slab or rock to the next. This would’ve certainly slowed the group down significantly, had we not divided.

In hindsight, a lower level of walk (1 Boot) should’ve been available on this day. We were following a ‘2 Boot’ while the longer ‘3 Boot’ had already set off before us. I don’t know why a full programme wasn’t available on this day as it was the others. Perhaps no-one was willing to step forward and lead a route? 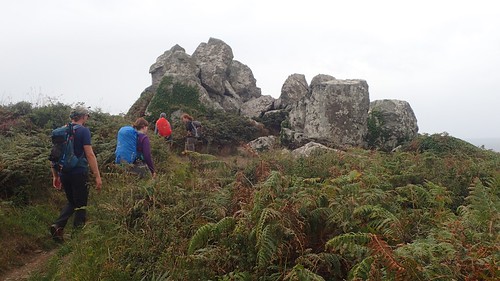 We later stopped for a late lunch beside the windbreak of rocks at Zennor Cliff and Zennor Head. 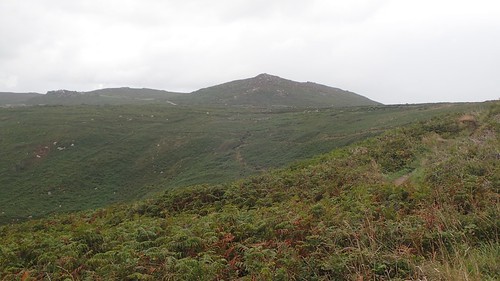 Ahead and to the south-east, we could see the moorland-esque landscape of what I had presumed would be our return route to the cars. Something to look forward to but, also, another physical challenge. 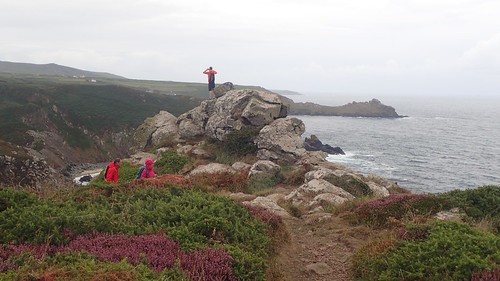 Looking on the OS map now, I can see a trig point up above our seated position. We ended up circumnavigating this hill, following the SWCP, before looping back in land. I imagine that could’ve been our second trig of the day. 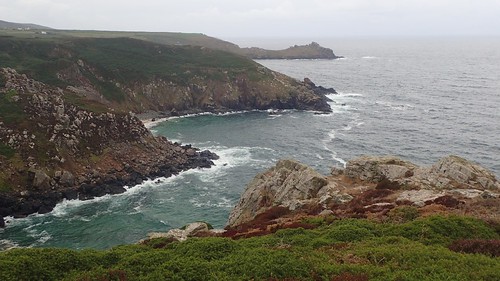 I had it in mind to do a walk on my own over the weekend, that would start further south-west at Rosemergy and continue along the coast path to this same point, where we headed inland to Zennor. But for an imminent decline in the weather conditions, that sadly didn’t happen.

I remember we briefly talked to a man walking his dog who sounded like he was local. I was listening closely, in the hope he had a strong Cornish accent… Unfortunately, not quite. 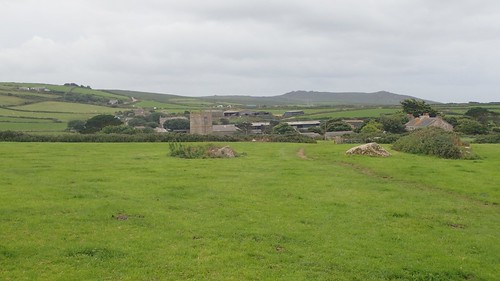 There wasn’t much to say about Zennor, although I remember seeing signs for a café close to the church. 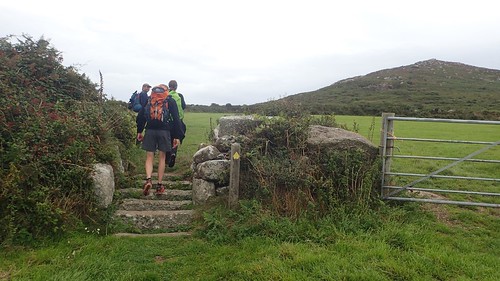 Having endured a morning of many large stone stiles before reaching the coast path, we would now have to contend with cattle grids made of stone! I’d not seen these before but wish they could be found all over the country.

You can also see what was probably Zennor Hill or Trendrine Hill (which also has a trig) in the distance. As they were on the wrong side of the B-road to us, we wouldn’t be walking as far and our return route mostly crossed farmland and quiet bridleways, much as we had done in the very beginning.

Distance of this walk = 10 miles

I estimate now that we only walked about ten miles on the day, in a walk that was supposed to be eleven, if not thirteen… (My memory fails me). This could mean I need to subtract a mile or two from my recent #walk1000miles tally!