All the way back in December 2017, I led a group walk in the Black Mountains that I soon grew to regret. One weekend after snow had fallen heavily across the region, I found the mountain tops were covered and we were struggling through depths up to our knees for much of our day. That’s without mentioning the rain waiting for us before we had a chance to put our boots on and the gale-force winds arriving from the east.

I’d thought about repeating the same route but have always held reservations over the small car park at Black Hill. So, for this outing, I decided to park elsewhere and lead a longer route along different paths. 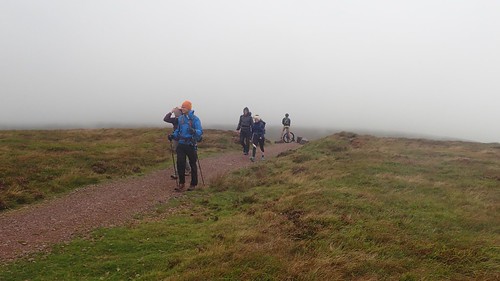 We’d start from the Gospel Pass car park, at the head of the Vale of Ewyas, between Hay Bluff and Lord Hereford’s Knob. Sitting close to 550m above sea level, this is the highest road pass in all of Wales. While I was a few minutes later in arriving to my own walk, having arranged car sharing back in Bristol, we’d end up waiting another our for the final car, who had possibly left a bit late and got lost along the way.

It wasn’t wet but very windy, with gusts in to the early thirties. Layers went on immediately, before we began our warming climb up Ffynnon Y Parc and up to the trig point of Hay Bluff; 677m above sea level.

Unfortunately, I didn’t take any photos here. I was too preoccupied with head-counting and making sure everyone was with us. From there, we continued south along Offa’s Dyke – just as I had intended to, on the day where we were defeated by the snow. 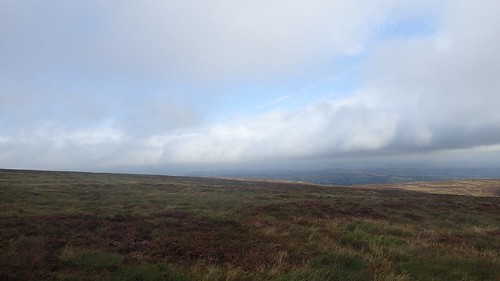 Early in to this walk, I feared it would be another day of poor visibility. Being able to see your surroundings (or not) can make a huge difference to anyone mountain or hill-walking experience. Blue sky only emerged in the slightest of glimmers. 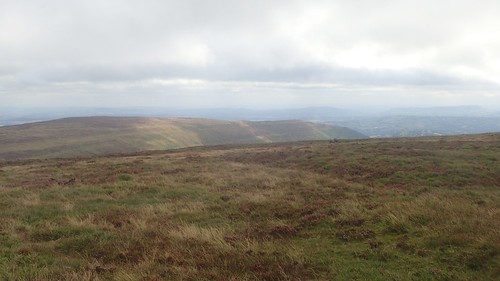 We could see the line of Black Hill away to the east. Invisible, in the majority of my previous walks along Offa’s Dyke. 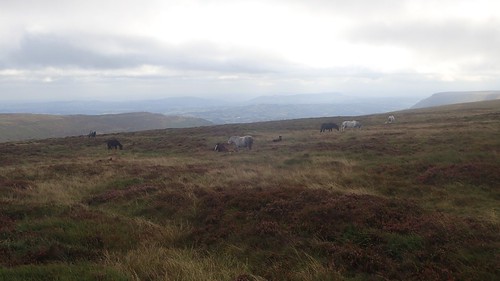 Wild horses and ponies roam these moors, as if the strong wind does not affect them.

Across the valley to the west, I could see another, higher ridge of the Black Mountains. Waun Fach, the highest point in the range, can be identified as the flat-topped peak. I’m currently thinking about soon leading another walk that heads up there.

We followed the Offa’s Dyke path for about 5km before beginning our descent to cross the Vale of Ewyas. We were walking in the opposite direction to how I had effectively pre-walked this route back in May. I felt slightly disorientated heading downhill, although the route was fairly obvious.

It was also more overgrown than on my past experience, with bracken leaves lurching over the path from either side. Finding a break from the persistent wind, we stopped beneath the hillside for lunch, with a view to the challenge ahead. 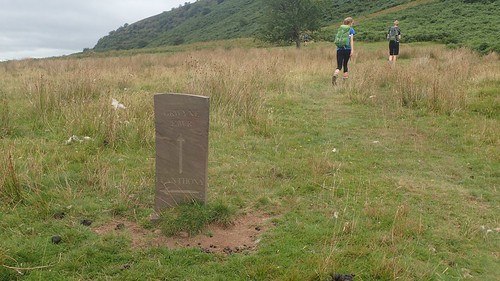 We followed the course of the Afon Honddu to Capel Y Ffin, passing two chapels before crossing to the other side of the valley. 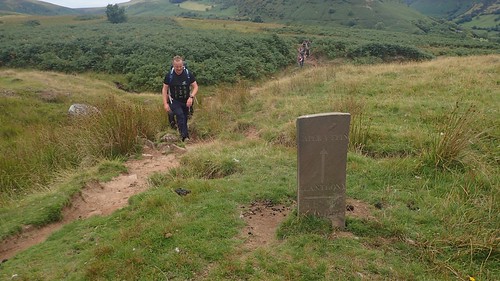 From The Grange Trekking Centre, our next climb would slowly begin. I’d come down a different way on my pre-walk and had missed these stones marking the suddenly-obvious right of way. As a leader, I was happy to sit back a few paces and allow others to march on, following the clear but challenging path. 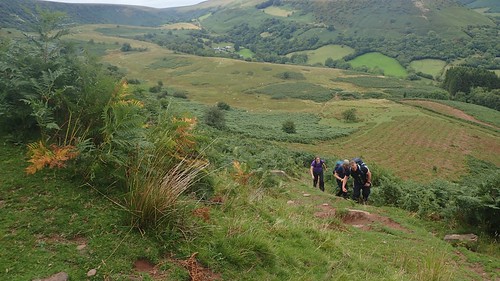 It was, by far, the toughest climb of our day. I’d deliberately led this route in a clockwise direction as I could remember the physical pain and near-nauseousness of climbing up on to Offa’s Dyke in May… This climb up to Chwarel Y Fan wasn’t significantly ‘easy’ but I felt it was more achievable, without anyone losing their lunch. 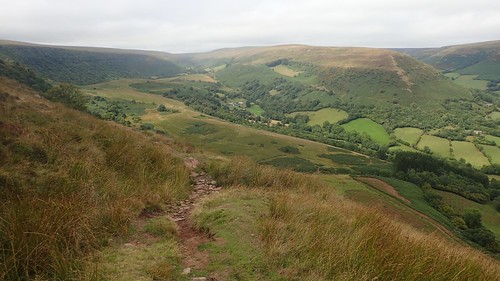 We paused for air and water next to an egg-shaped cairn. This was a view looking north along the Vale of Ewyas; a route we’d driven along in the morning, with many narrow and challenging bends. 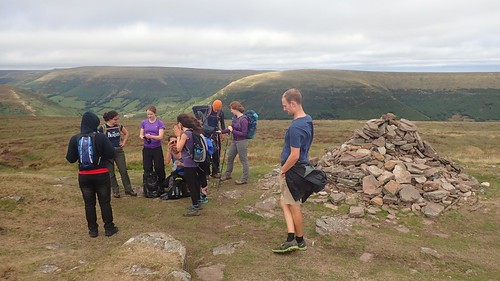 We stopped again beside one of the cairns close to the highest point of this ridgeline and around 600m above sea level. Soon realising it was time to layer up once more. 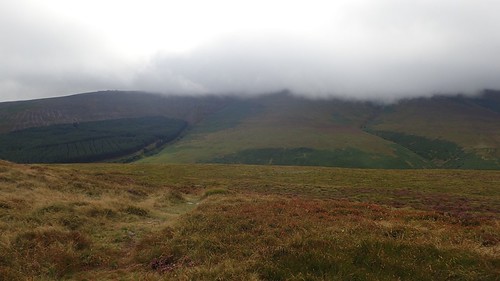 Looking west now, Waun Fach was hidden behind cloud, some 200m higher than us in elevation.

Grwyne Fawr Reservoir and dam could also be seen. I’m thinking that my next walk will pass down alongside it, before the end.

One last push and we would follow the Chwarel Y Fan ridge north-west to Rhos Dirion and our highest point of the day. We would gain a good 100m of elevation over a steady 4km.

There is is, the trig point of Rhos Dirion; standing at 713m above sea level. 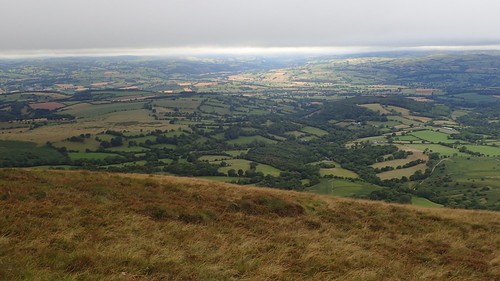 A rewarding view, looking north to Powys, I believe. Herefordshire may even sneak in to a corner of the frame. 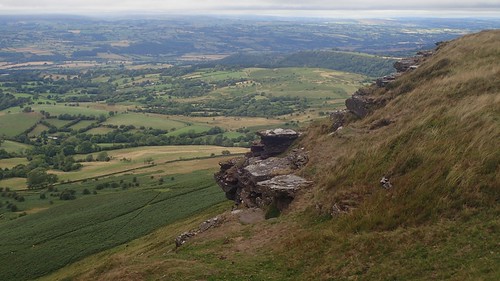 We’d now follow the escarpment north-eastwards and en route to our cars. 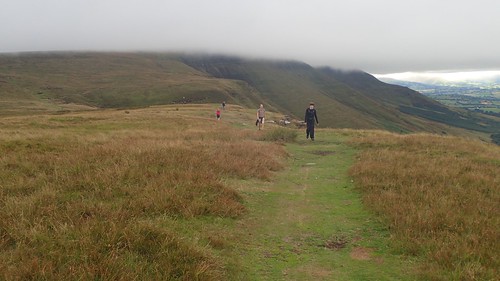 Cloud was coming in but the navigation was fairly easy, with a sheer drop down to our left. I’d forgotten that we wouldn’t simply descend to Twmpa from Rhos Dirion and that another ascent of around 100m was waiting for us…

But we all made it up the red sandstone hillside and to the infamous cairn of Lord Hereford’s Knob… I still know the origin of that title, which is why I prefer to call it Twmpa! 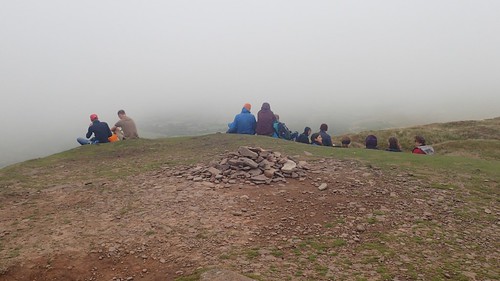 We stopped once more. It hadn’t rained significantly all day, despite the weather forecast and the constant threat of grey cloud. Some were able to find a natural windbreak on the north-eastern slope of the summit. 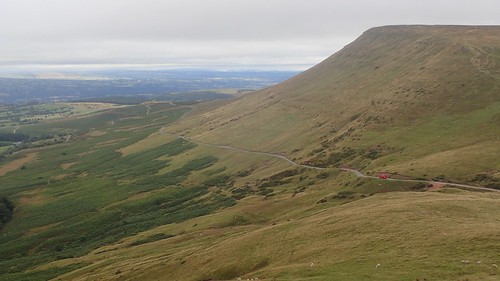 From there, it was a straightforward descent to the cars; barely losing 100m in elevation. It was a bit later in the day that we’d hoped and only half of the group were interested in the pub stop, for which we headed to the Skirrid Mountain Inn, with the prospect of another ninety-minute journey back to Bristol that would already take us in to the evening.

I’d enjoyed the experience of leading this walk. Partly because we had a good mix of people and also as I had been able to relax a bit and allow people to instinctively follow the obvious paths, without having to provide constant direction.