According to my memory, it took us a good three hours to climb up and over Tryfan from the A5. A remarkable statistic, considering the direct journey to the top measures only half a mile or so.

We weren’t about to make an immediate return to the car, though. Onward, we strode towards the Glyderau. 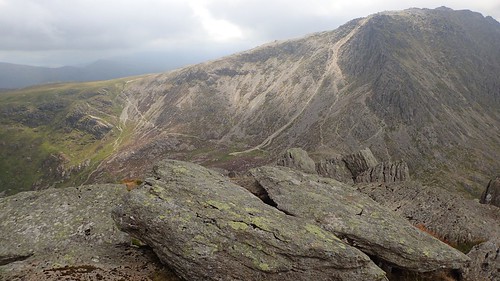 We would descend as far as Bwlch Tryfan – a shallow pass between the mountains with ladder stiles to help you over the dry-stone wall. 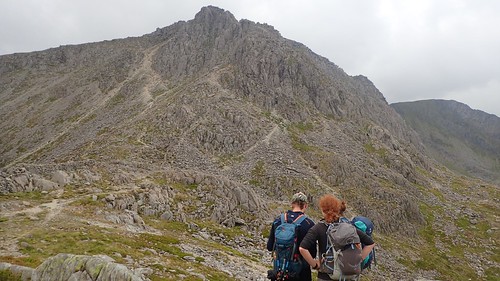 From there, we could stand back and try to assess our route going forwards. There’s an obvious scree path going up to the left (east) of the summit and, if you’re looking for less an incline, another route heads out further east before heading up along the spine.

But we knew that scree can be hazardous, walking up or downhill and we hadn’t come this far to take the most common route to the summit. 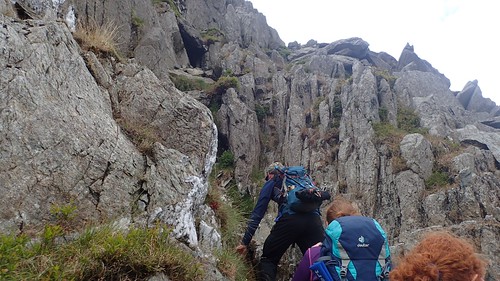 I think it was Dave who had bought a Cicerone guide book (Scrambles in Snowdonia) with him, which detailed the scrambling route in words. As with Tryfan, earlier in the day, this is another situation where an Ordnance Survey map won’t offer you a great deal of help.

So, we began to climb on all fours, once again. I’d enjoyed the scramble up and over Tryfan and looked forward to climbing the north face of Glyder Fach. 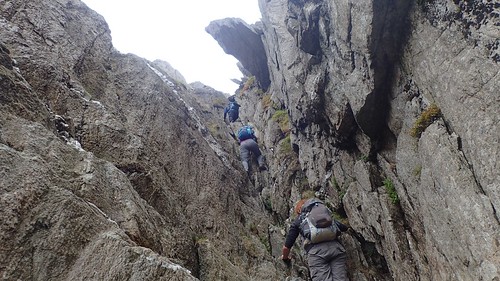 There’s one particular section that stuck in my mind and it’s known as Sinister Gully… For reasons that are hopefully apparent in these two photos! It was as vertical as it looks. A true don’t-look-down situation. But we all made it. 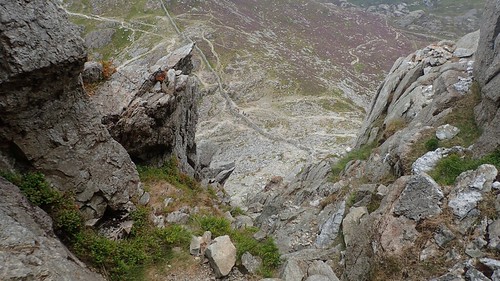 Looking back down the gully, I felt both terrified and slightly elated. It is not something I would ever want to climb down without some form of rope. 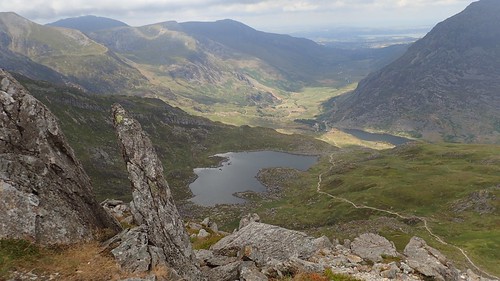 Restoring our necks to their normal posture, we also had great views of the valley now beneath us, including Llyn Bochlwyd. 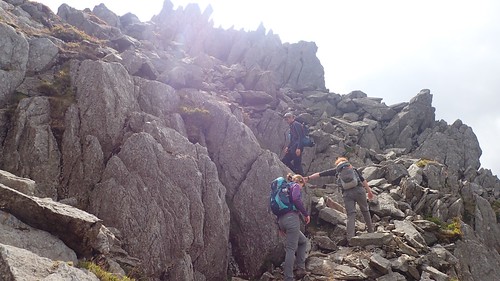 If you research scrambling up Glyder Fach, you’re bound to encounter Bristly Ridge without digging too deep. I have a feeling that we worked our way around this [I might be wrong], instead of attempting to climb over the monoliths. There’s no right or wrong way to the top and finding your own route is part of the challenge. 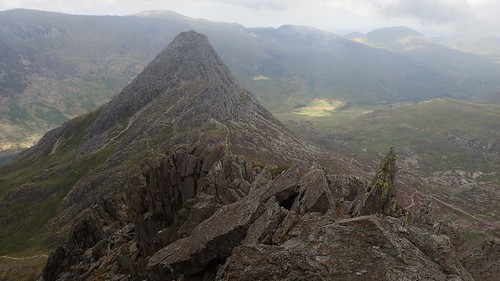 Tryfan, now behind us – and, almost beneath us – was a prominent feature.

We reached the rocky Plateau of Glyder Fach. According to Wikipedia, it translates in to ‘Small Mound’ and is the second highest peak in the Glyderau range, with its highest point at 994m above sea level. 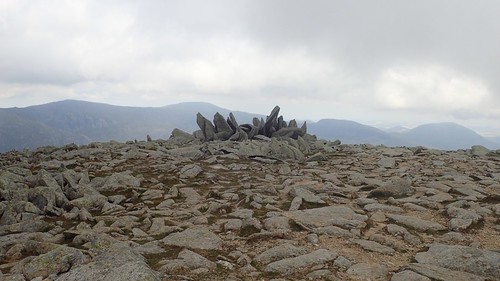 This is Y Gwyliwr, which apparently means ‘The Watchman’. For a moment, we thought this might’ve been Castle of the Wind. If that had been the case, it would’ve been comparable to visiting Stone Henge for the first time… Underwhelming. 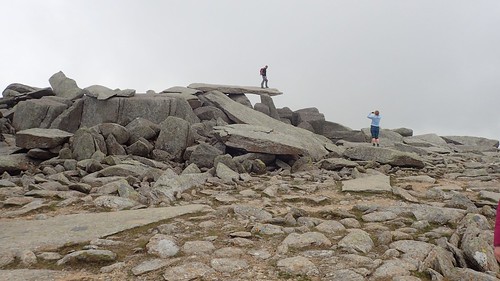 If you know your Welsh mountains then you’ve probably come across the Cantilever Stone, where everyone stops to pose for a photo. Once these guys had finished, we had the summit to ourselves. 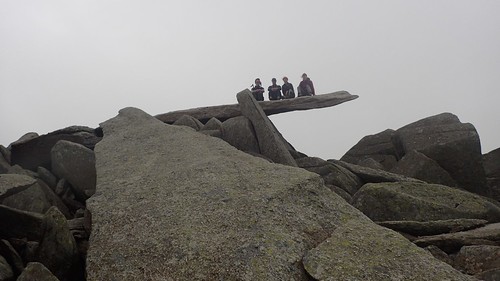 Here’s the group photo that I arranged with my camera set to timelapse mode, a delayed start and programmed to take one photo every ten seconds or so.

Why were we sat down? Because, for the first time on this day, we were exposed to the 20mph wind and gusts close to 30mph. It suddenly quite cold, despite being in the middle of July. 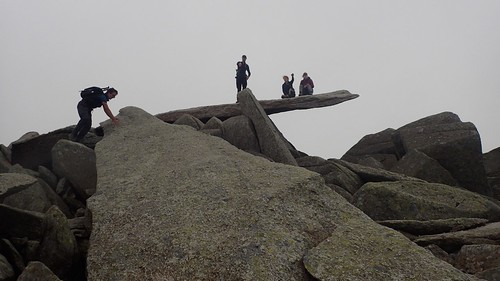 So far on this day, I think I had the right idea in sticking with a short-sleeve T-shirt and wearing an insulated vest or gilet. Some of the others had long sleeve tops on during the scrambles and were feeling the heat very quickly. Yet, it wasn’t necessarily warm enough to wear nothing more than a T-shirt. 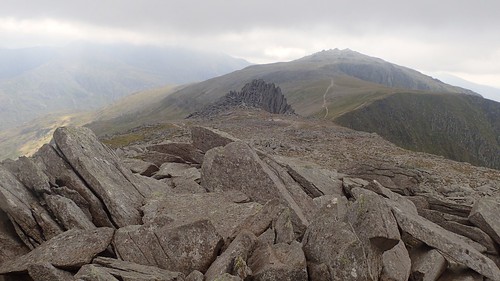 We clambered on to the huge fallen monolithic rocks to claim the true summit of Glyder Fach. Looking west, we could see the true Castle of the Wind and Glyder Fawr beyond. I like the atmosphere in this scene. I think it’s almost like taking a journey towards an evil castle. 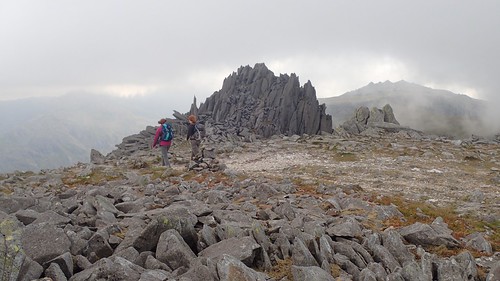 Here is Castell Y Gwynt (Castle of the Wind). 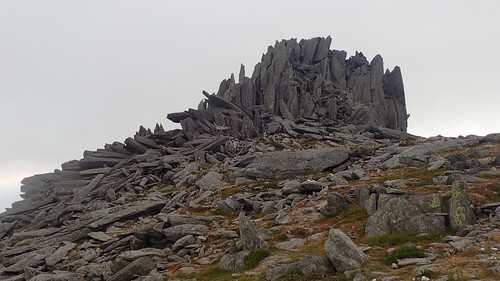 I know very little about geology and wish I understood how this had formed and, why only here. Was it due to a shift in the tectonic plates below? There must be a Welsh legend or folk tale, similar to Cadair Idris: the chair of Idris the giant. 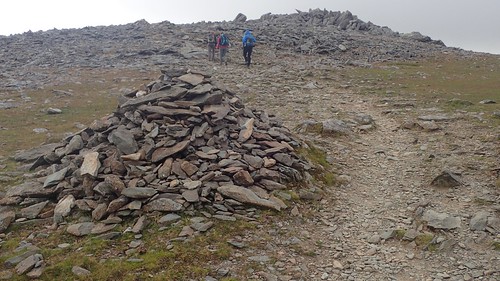 Heading up to Glyder Fawr (‘Big Lump’), the main path was easy to follow and marked by the occasional cairn, which is probably more useful in conditions of low visibility. At 1,001m above sea level, it’s the highest point in the Glyderau range and, at the time of visiting, it was the highest point I’d personally visited in the UK. 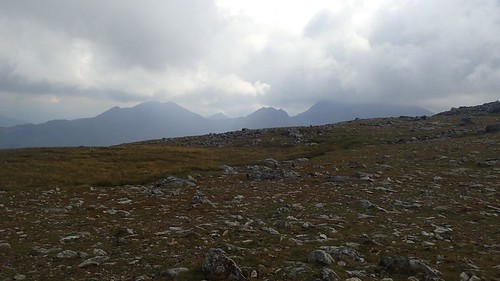 South-west of here, we could see Snowdon and a portion of its Massif. We may even have been staring at the knife-edge ridge of Crib Goch, which we’d be facing in forty-eight hours’ time. Snowdon’s actual summit was, naturally, obscured behind the cloud. 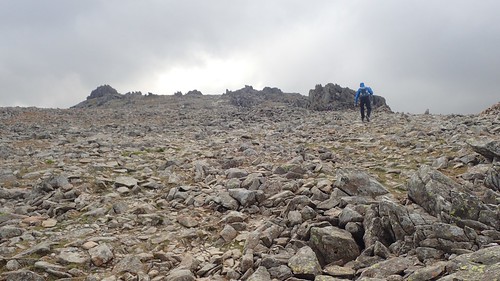 Glyder Fawr is very much a ‘moonscape’. 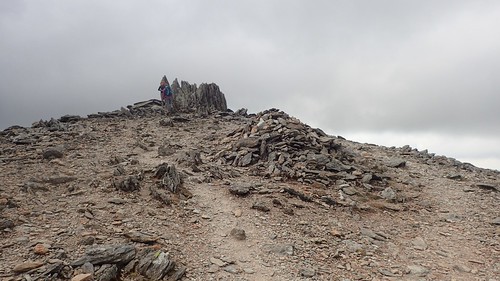 Despite being the highest point in this range, there’s no trig point to be found. But I guess the early surveyors of Ordnanace Survey had plenty of other high points from which they could conduct their work in mapping the landscape of Britain. 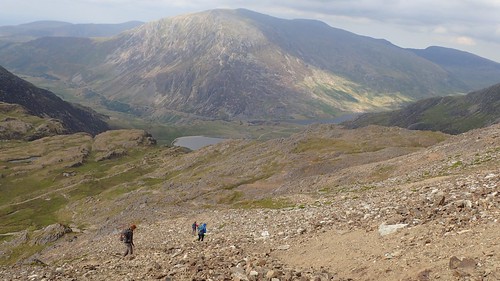 With the wind howling at us from the direction of Snowdon, we soon began our long descent towards Cwm Idwal. We’d not seen anyone else outside of our own group up on Glyder Fawr. A pleasant sensation, if also adding to the eerie nature of the land. 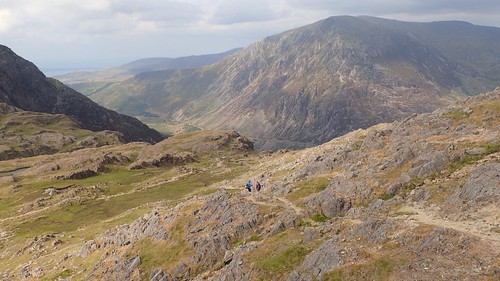 Rapidly losing height, we’d attempt to follow the obvious path heading down towards the east of Llyn Y Cwn, which was mostly laden with scree. Those of us with walking poles were grateful to have them, even though it was still a struggle to remain upright. I took it very slowly. 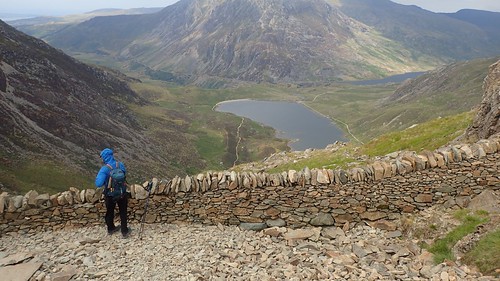 We’d barely lost 300m in elevation by this point. Our knees were already feeling it and we still had a lot of descent to follow. 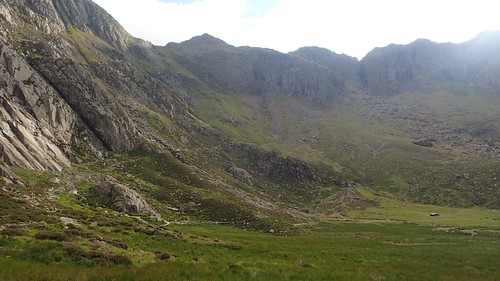 From the dry-stone wall, our route was mostly stepped. Large steps, formed of single slabs of rock. I don’t actually mind climbing up steps but heading down, I find each thud carries an impact in to the joints. 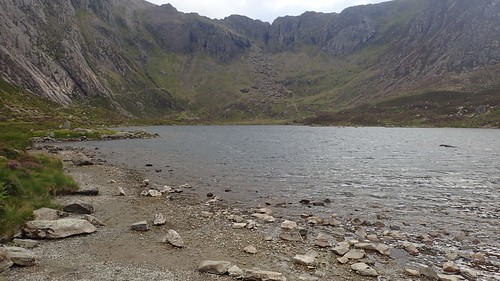 Along the eastern edge of Llyn Idwal, we crossed a footbridge made from a single slab of slate. It must’ve been 8ft long. It was flat, smooth and quite comforting after many metres of stone steps and scree. 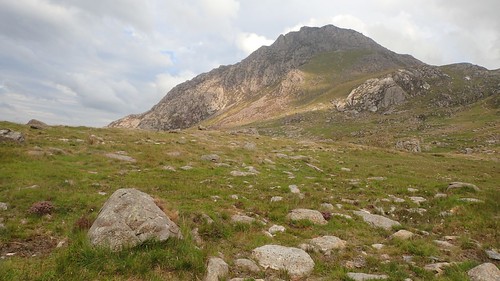 We followed the footpath to the north of the valley before rejoining the road close to the youth hostel. 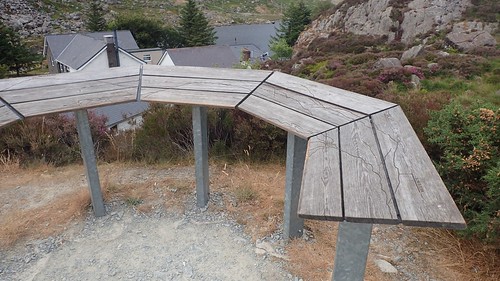 There’s also a visitor centre with public toilets, which we still open so late in the day (I think it was somewhere between 18:00 and 19:00 by this point). 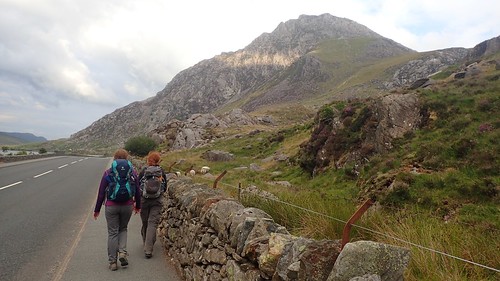 Following the A5 eastwards, we had just over a kilometre to walk before returning to the car. It felt like a very long way but, it was flat and we’d achieved so much in our first day of exploring Snowdonia, while avoiding the masses.

3 thoughts on “Exploring the Glyders”