Another member of Brunel Walking Group (Jo) has decided to walk the ninety-mile long White Horse Trail this year and all current and future members are welcome to tag along in a series of circular walks. 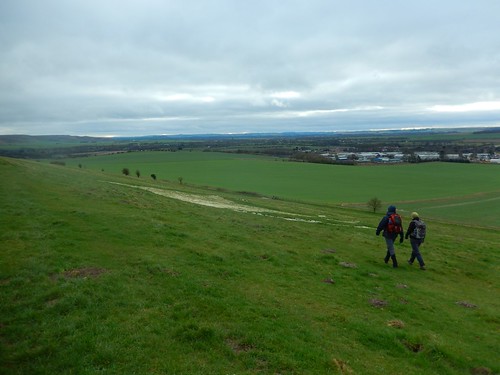 Each walk will in the region of fifteen to twenty miles in length and the aim is to complete the long-distance trail around Wiltshire in seven circuits.

Our first walk began at Roundway Hill near Devizes. From our first White Horse, we followed the Wansdyke and looped around Avebury before a return via. Cherhill and its own chalk figure.

This was almost one month to the day since a few of us completed the Stonehenge Stomp walk. It seems like I’ll be getting know Wiltshire quite well this year, as I’m also looking to walk the Ridgeway in a solo trek! 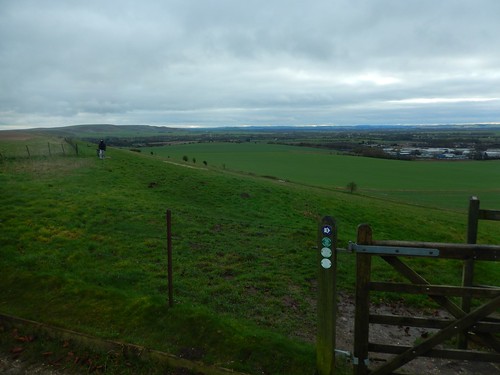 So, we parked at the top of Roundway Hill – always a pleasing site for the start of the walk; great views and the knowledge that you can’t immediately go any higher. Especially in ‘flat’ Wiltshire, which isn’t renown for its gradients and contours. 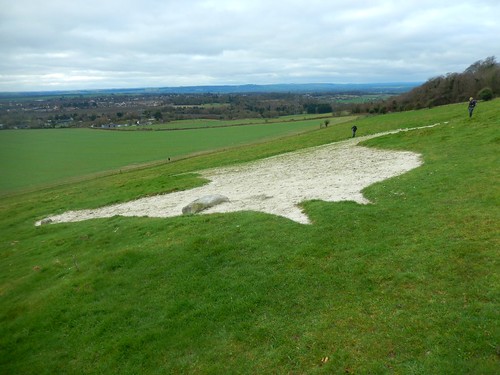 We did find our very first White Horse (the Devizes Millennium White Horse) on the other side of the fence from the cars. You can walk along its northern edge but it’s one that’s best viewed from a lower vantage point. You can also see its ‘eye’, above. I’m not sure how many of them have eyes.

When asked the question of what was unique about this chalk figure, I guessed the right answer, in noticing how it faces to the right, where every other White Horse in Wiltshire faces to the left. But this is apparently not the original horse of this site. 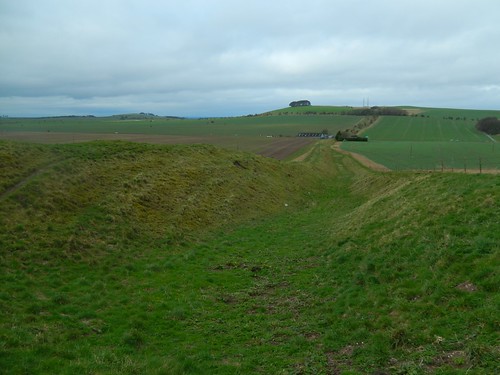 We followed a bridleway northwards; soon losing height to join the Wansdyke path, now heading to the east. 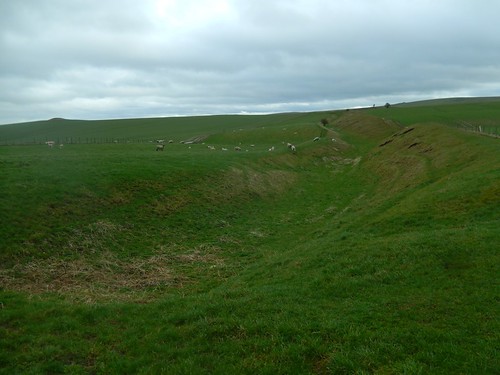 From Morgan’s Hill where we met with the Wansdyke, is a stretch I know well, as I first walked here in 2014 and then again in 2015, when I led a group walk. It’s an ancient earthworks built as a line of defence. It’s known to have existed in two halves – on this walk, we were following the eastern section, while the west originates very close to Bristol. 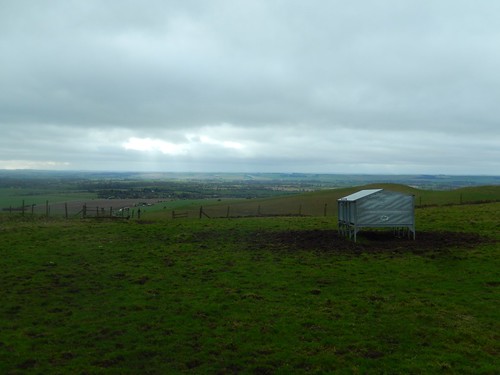 While much of this initial route was familiar to me and one other, it was enjoyable. I hadn’t been here for a couple of years and we did end up following the dyke beyond my usual turning-off point. 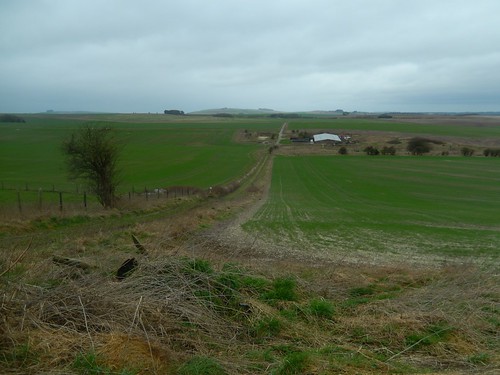 Somewhere along the way, we joined the official White Horse Trail and, within the parish of East Kennett, we made our way north towards Avebury. 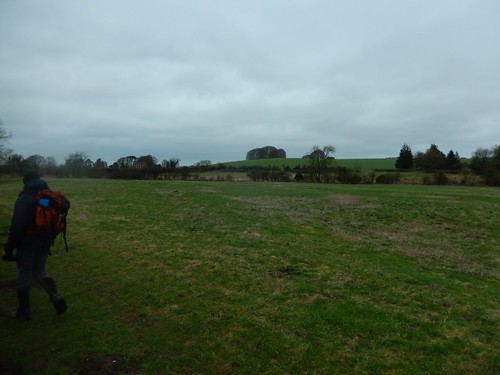 Jo highlighted the small clump of trees on top of Overton Hill, which is the western start point for the Ridgeway long-distance path. 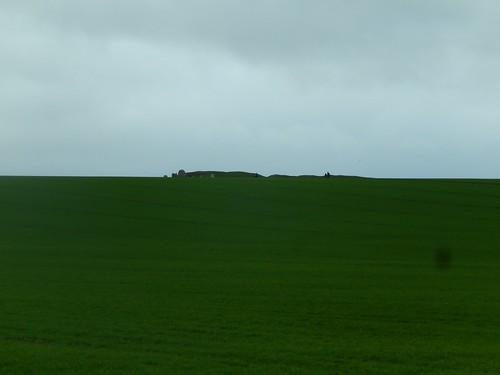 Up to our left, we could see West Kennett Long Barrow standing proud of the hill. It’s a shame that all long-distance paths bypass it directly. It must be one of the most-visited Neolithic sites in Wiltshire. I highly recommend a visit to anyone – you can walk in without having to squat or crawl and, in recent years, they’ve even fitted a skylight.

I hadn’t noticed before but there is also an East Kennett Long Barrow site marked on the OS maps. Sadly, there’s no public right of way to or from it. I’ve also read that it’s never been excavated and is longer than West Kennett. 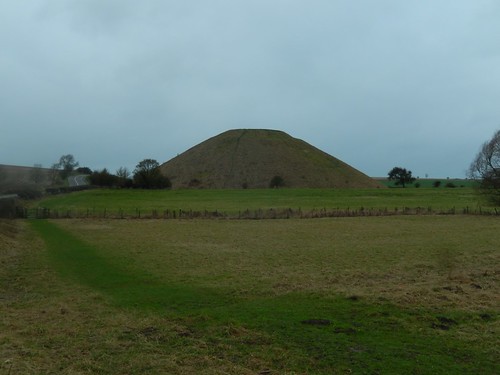 Over the A4 and we were within touching distance of Avebury. To our left, another ancient monument in Silbury. Man-made for purpose that remain unknown to this day, while public access is strictly forbidden in order to preserve this feature. Many have likened it to the flat-topped Pyramids. 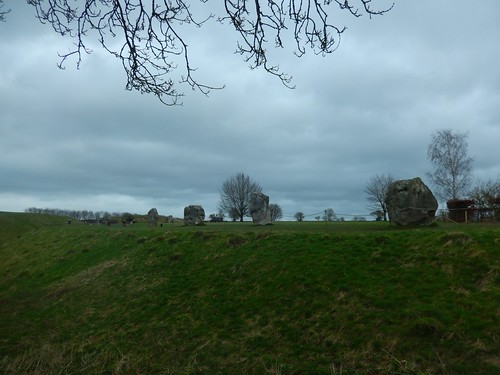 Avebury is a village that exists within the Neolithic site on an historic stone circle (also called Avebury), which is now segmented by roads. It makes more sense if you view it from an Ordnance Survey map. Some prefer this area to Stonehenge as you get right up close to and touch the huge standing stones. 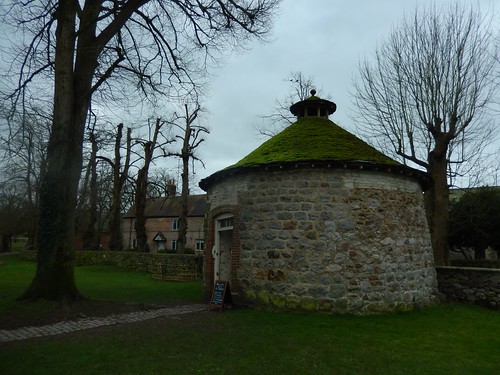 Much of the area, here, is owned by the National Trust and they provide a large car park that was almost packed even as we passed through, on a February day in the wake of Storm Ewan. Stopping here for lunch would approximately mark the halfway point in our walk. 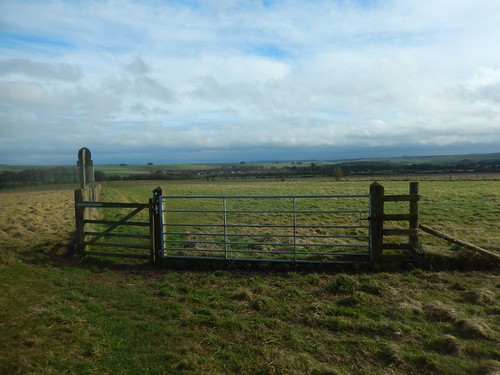 Back on the White Horse Trail, we walked north before the surprisingly enduring climb to the summit of Windmill Hill. 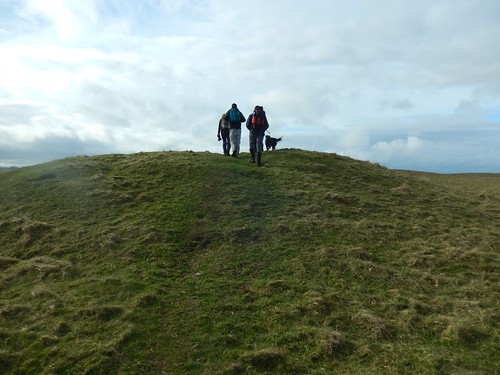 It’s only 196m above sea level but, with Wiltshire lying so low, I guess it takes you by surprise. A bit like travelling through space to step on to another planning with a greater mass of gravity than our Earth… I imagine. 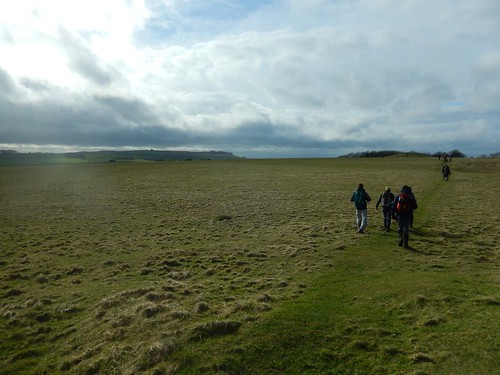 As we crossed this “causewayed enclosure”, rays of light began to break through the cloud. This day had been a cold one, so far. I don’t remember any significant drops of rain but we had a dry return to our cars in sight. 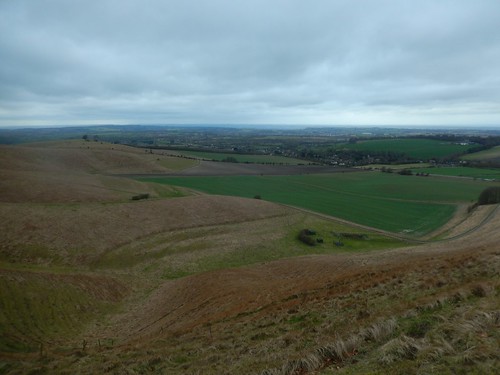 We walked south from Windmill Hill to cross the A4 for a final time and walk west along the northern edge of Cherhill Down. 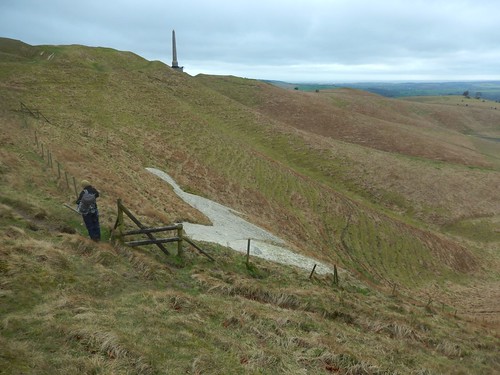 With unobstructed views looking west towards Calne, we would discover our second chalk horse before continuing on to the monument. 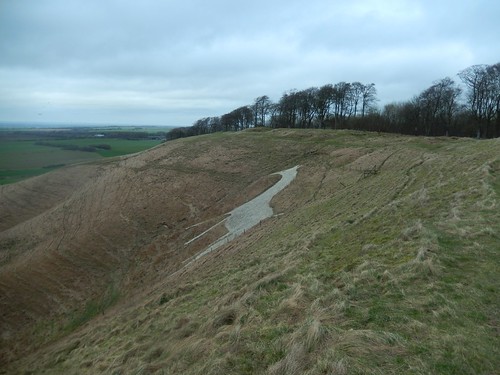 This is the Cherhill White Horse, also known as Oldbury White Horse (it sits on the site of Oldbury Castle hillfort). 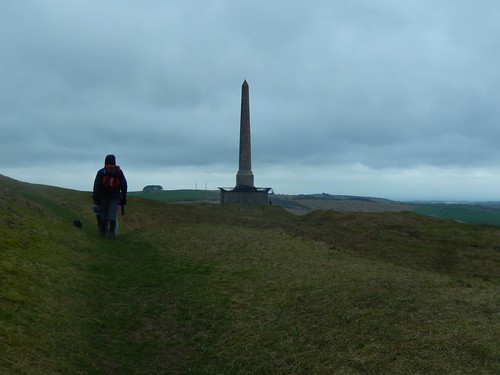 Again, this section of the walk was familiar to me, having walked through here twice previously with the inner portion of previous walks. 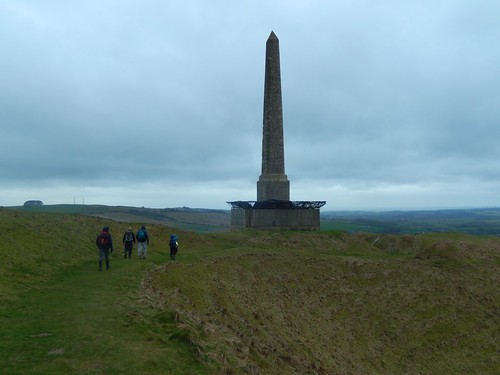 Marked on OS maps as the ‘Cherhill Monument’, the Lansdowne Monument was built by the same family who have owned Bowood House, which isn’t too far away. From there, both the White Horse and obelisk can be seen. 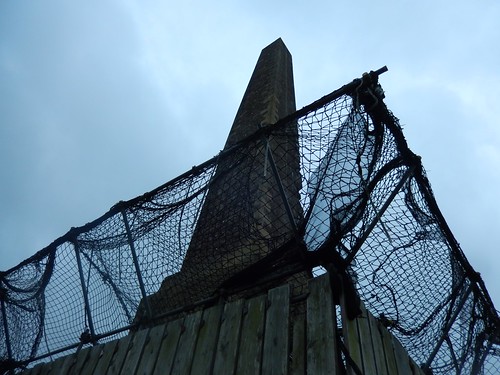 Each time I’ve come here since 2014, I’ve found the monument in the same protected state, in order to preserve the safety of visitors and people passing by. 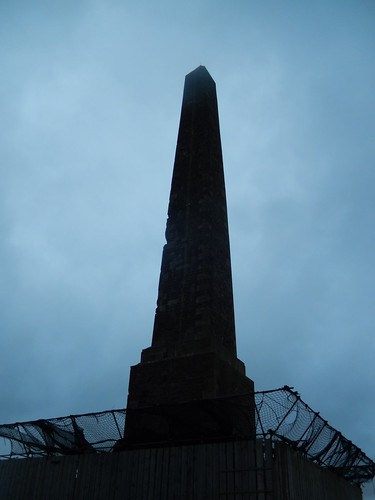 I read on a plaque close to its foundations that the cornerstones are at risk of crumbling, with exposure to high wind and all weather conditions. I hope that a repair can one day be funded and completed, so that we can all get up close to what is currently a convenient wind-break in storm weather.

Higher up the obelisk, you can see where stone has been chipped away, almost like someone’s taken a large bite out of it. 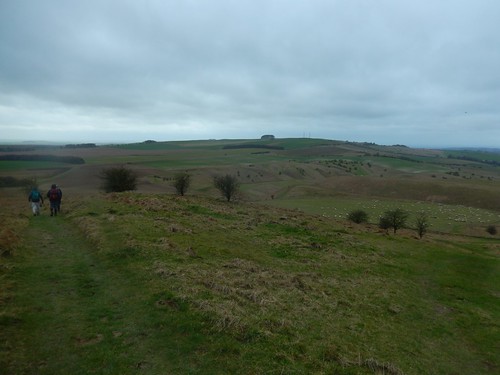 Soon after this, we were losing height once more and heading in to our final hour of the walk. Above the sky was turning darker, as we looked to join a Roman Road heading west for Morgan’s Hill. 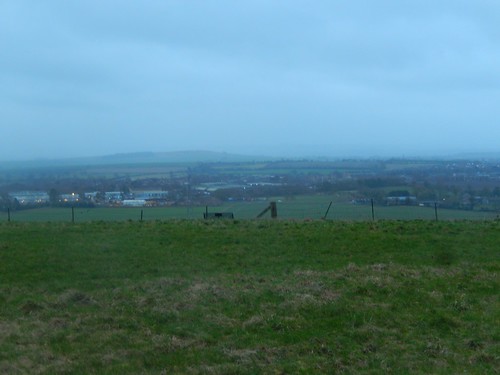 As we retraced our outgoing route along quiet roads and tracks, the heavens opened. Now, the rain wasn’t too severe… But we were constantly up against a headwind that must’ve been around 50mph! It was a true test of endurance! As we arrived back at the cars – and in good time before nightfall – we felt like we had conquered one of the world’s highest mountains…

Total distance of this walk: 20 miles

Part two of this series is due to take place next Sunday, which also happens to be Mother’s Day… I won’t be able to participate with the group for that reason but will look to do the next nineteen-mile circuit on my own, so that I can walk towards completing another ninety-mile long-distance path in 2017. 😉 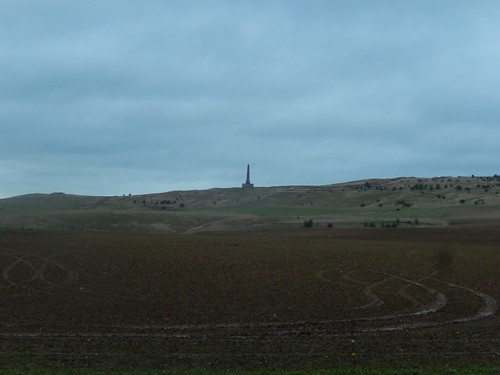